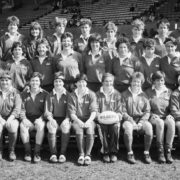 The first Women’s Rugby World Cup was an overall success – 12 international women’s rugby teams competed for a world championship, all games were played, and all of those involved proved the women’s game could draw and impress an audience. Sponsorship and funding may have been at a premium, but the players and organizing committee did not shy away from the perceived risk of holding the event without the international governing body’s authority.

It was a tournament run for players by players who were prepared to risk their own money to bring their particular dream to fruition, and in that sense has taken rugby back to its original and purest roots. David Hands, The Times

Plans for a second WRWC were set in motion, with more teams interested in having a say in who walks away with the trophy. Amsterdam in the Netherlands – the country that participated in the first international women’s test match – was chosen as host following a summer of bidding not unlike the current processes for determining World Cup and Olympic hosts worldwide.

Scarce outside resources could partly be attributed to the timeframe in which the ’91 World Cup was held, as the second men’s event was held that same year. To avoid similar difficulties in the organization and promotion of the women’s second World Cup, it was decided the event would be moved to ’94 – one year prior to the culmination of the men’s quadrennial.

Complications in the planning and implementation of hosting the World Cup in the Netherlands again forced World Rugby’s hand in denying the tournament an official endorsement. New Zealand was just one nation that withdrew monetary support for its team’s travel and expenses, and others withdrew entirely. Near the turn of the year 1994 and three months from the expected April kickoff in Amsterdam, the Netherlands withdrew not only its team, but its rights as host, cancelling the event.

Scotland, absent from the inaugural World Cup, followed Wales’ lead in putting on the event without any financial or sponsorship guarantees. The April date of the competition remained, as well, amplifying the pressure on the new host. New Zealand and the Netherlands were two of the original 16 nations scheduled to play that did not make it to Scotland, with a local students team replacing late-withdrawal Spain in Pool C. Accommodations and venues were secured – and local establishments caught the rugby spirit in helping the again-poorly-funded Russians – and the tournament went ahead with 12 teams in four pools.