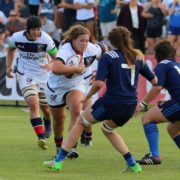 Stade de la Méditerranée in Béziers will host the first matchup between the 2016 RBS Women’s 6 Nations champion and the U.S. Tuesday, Nov. 22, with the second match set for Altrad Stadium in Montpellier Friday, Nov. 25. Broadcast information for the 10th and 11th meetings between the teams will be announced at a later date.

The Eagles first met France in international play 20 years ago this month in the 1996 Canada Cup. Since then, France has accumulated nearly 200 tests to the U.S.’s total of 106, and holds an updated 7-1-1 competitive record over the Americans with the most recent victory in Salt Lake City. Head Coach Pete Steinberg’s team’s lone win came at the onset of a three-match series against France in southern California in the summer of 2013.

“France are a great team for us to play,” said Steinberg. “They are consistently a top-four team and their level of physicality is probably the top in the world. It is also great to play in the heartland of French rugby in the south.”

The birth of his first child will keep Steinberg away from the team come November. Peter Baggetta, an assistant with the Eagles at Women’s Rugby World Cup 2014, was named associate head coach earlier this year and stepped in to lead the Eagles for the final match of the Super Series in July. He will continue that lead role with the Eagle for the Fall Tour.

This fall will mark the first time selections will be made with a unified women’s program as sevens and 15s work together to increase the chance of success at the World Cup in 2017 as well as Rugby World Cup Sevens in 2018 and the 2020 Olympics in Tokyo.

“One of the questions to come out of the last Olympic quadrennial is, are our players playing enough high-level rugby?” USA Rugby Director of Performance Alex Magleby said. “In this next cycle we see sevens and 15s working together to support the success of all U.S. teams, providing important, pressure-filled experiences for players as we aim to be on the podium in Tokyo.”

Fall Tour team selections will be made based on Super Series performances, sevens residency performance, National All-Star Competition data from January and June, club and college campaigns, and additional international competition, including age-grade assemblies. More information on the roster and match times will be made available in due course.