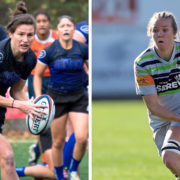 LAFAYETTE, Colo. – More than 90 athletes have accepted invitations to the Women’s Eagles National All-Star Competition to be held at Tigertown Complex in Lakeland, Fla., Dec. 29, 2016, through Jan. 3, 2017.

Beginning about eight months from kickoff of Women’s Rugby World Cup 2017, the NASC will produce a greater WRWC player pool for Head Coach Pete Steinberg and staff, consisting of around 35 or 40 players. The core group will then assume the focus of the national team’s attention in the final build-up to Ireland, which may include international matches held domestically.

The Eagles are coming off of a two-match November Tour of France, where the team was coached by Associate Head Coach Peter Baggetta. WRWC veteran Hope Rogers, 23, captained the U.S. in two losses, though the team was able to incorporate the debut of several sevens standouts and younger players amongst a core group. Additionally, venturing on an international tour not unlike what the athletes will experience at a World Cup proved invaluable to players and staff.

“Off the field, the team did a great job,” Steinberg said. “They handled some of the challenges really well. The culture of the team is in a good place. We have a lot of strong team leaders that are really helping to manage the team’s interactions. It was a very positive tour.”

Building off of the most recent tour and the two Women’s Rugby Super Series events in North America since the end of the 2014 World Cup cycle, the NASC is designed to test both players and coaches in an international-like environment. Concentrating less on individual skill, the coaching staff will split the roster into teams to bring about a competitive atmosphere, driving the athletes to fight for roster spots.

Some young athletes selected to the NASC will be part of the AIG Women’s Collegiate All-Americans portion of camp, a developmental squad that could produce World Cup Eagles. The seniors and developmental party will compete in two matches each across the match days of Dec. 31 and Jan. 3, with the prospect of moving up the ranks in camp healthy motivation.

“The NASC, for us, is a selection venue,” Steinberg said. “There’s not a lot of time for player development. We’re going to be playing what we think is our current top 15 versus our ‘next’ 15 to get our best players together and get the highest level of play out of the athletes.

“If someone in the first game plays better than their opposite number, then they can be in the top 15. Then we have a bunch of players we’re bringing in who have been on the cusp of the Eagles, and we want to give them an opportunity.”

Steinberg has worked in close conjunction with Women’s Eagles Sevens Head Coach Richie Walker to identify those in residency at the Olympic Training Center in Chula Vista, Calif., that could transfer to the 15-a-side version of the game in a compressed timeframe. Both coaches have highlighted the need for athletes to play high-level rugby as a condition for improvement, with the NASC beneficial to the 15s and sevens programs.

Olympians Joanne Fa’avesi and Alev Kelter were on debut in the backs in France last month, slotting into an attacking structure that has been cultivated since 2014. As much as it was important for those kinds of players to earn international 15s experience, the coaching staff learned plenty from the France Tour in terms of needs for the team in the final months of World Cup preparation.

“With the sevens players that we have engaged this year, I’m confident we have the athleticism in the bag,” Steinberg said. “In the forwards, probably the biggest area of need is identifying the best back-row combination. There are a lot of good back-row players, but we’re trying to work out the best combination and getting them to play together.

“In our attacking structure, we think we took some steps forward. The thing that has consistently plagued us this year is basically skill breakdowns: dropping the ball, not making the right pass or passing effectively, missing the tackle. Those are just individual skill issues that have been hard for us to address, and a reason why we’re changing our approach a bit.”

An opportunity for domestic coaches to attend the NASC and gain experience working in a High Performance environment has been made possible through the Elite Coach Development Program, as well. Coaches from outside of the national teams will be tested themselves on how to work in a short assembly as opposed to the season- or year-long timetables they may have with a club or college program.

A greater Women’s Rugby World Cup pool will be announced following the culmination of the NASC in Lakeland, while a 2017 calendar will also be finalized.