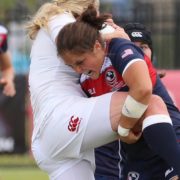 The U.S. is ranked seventh in the world having finished sixth at the 2014 tournament in Paris, with an important November Tour in France and final stretch of preparations upcoming ahead of the August 2017 kickoff. The Eagles will face No. 4 France – drawn into Pool C with Ireland, Australia, and an Asia/Oceania qualifier – twice in the coming weeks, with both matches to be aired live on The Rugby Channel.

England has twice made the trip across the Atlantic Ocean in the two years since its World Cup triumph at the expense of Canada – drawn into Pool A with New Zealand, Wales, and a to-be-determined Asia/Oceania qualifier – and is currently ranked third in the world behind the runner-up and No. 1 New Zealand. In the first two years of the new quadrennial, though there are only three years between the seventh and eighth World Cups, the Eagles saw 14 players make their international debuts in two losses to England at the Women’s Rugby Super Series.

Italy, ranked one spot behind the U.S. in eighth, has played in just three of the seven World Cups held since 1991, including the inaugural tournament. Its 4-9 record in those three tournaments is on par with the team’s all-time record of 42-2-76, with one of those losses coming to the United States in a 2012 clash – the teams’ only meeting. Most recently, the Italians finished this year’s Women’s 6 Nations competition in fifth.

The final Pool B opponent will be known later this month when Scotland and Spain play each other in a home-and-away, aggregate playoff Nov. 18 and 26. The two nations have more experience at World Cups than their European counterpart Italy with four and five appearances, respectively, as well as a combined 1-6 record against the Eagles in international competition.