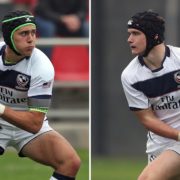 Captain Nate Augspurger will lead a starting XV boasting 115 international caps from the scrum half position, with a further 49 caps and one debutant available in the reserves. Kicking off at 5 p.m. ET on NBC Sports Network, the June 10 clash marks the first of four matches set to be played by the U.S. National Team this summer, and the first against Ireland since 2013.

“We’re focused on our purpose and we’re getting back into the processes of our working week – which the players are now familiar with coming in to camp,” Mitchell said. “Camp does stress the athlete in terms of learning and work load, as well. The athletes have had a high work ethic with a healthy desire for competition.

“It’s also a case of managing the athletes. We have the immediate short-term of dealing with and trying to out-fox Ireland, but we also have an eye on preparing for the end of the month and are holding back some athletes in order to manage their training load.”

Augspurger’s last three test appearances for the Eagles came at the wing position as the team secured the Americas Rugby Championship 2017 title in February and March of this year. In his ninth cap – and ninth consecutive start at the senior level – the No. 9 will partner fly half AJ MacGinty, who last wore the U.S. jersey against Uruguay in the ARC. The Irish-born Eagle scored eight points in that game from the inside center position, which will be filled by Super Rugby professional Marcel Brache Saturday. Ryan Matyas is also starting in the midfield, while the backs have the injection of sevens star Martin Iosefo and seven-try international Mike Te’o along the touch lines.

Young Ben Cima, joint-top point-scorer of the ARC in his first action with the Eagles, will be tested at the No. 15 position by the world’s fourth-ranked nation. Fellow All-Americans Peter Malcolm and Ben Tarr get the nod in the front row, leading the pack with Rugby World Cup veteran Chris Baumann in the Colorado native’s 18th appearance.

Having formed a formidable duo in three consecutive wins for the U.S. in the ARC, Nate Brakeley and Nic Civetta reunite to give Mitchell’s squad a mobile second row capable of performing in set pieces and the loose. John Quill, another Eagle with Irish heritage and team-leader in caps with 20 heading into Saturday’s kickoff, scored his first try since the 2015 World Cup in the ARC. He will slot into the blind side position beside Tony Lamborn, joint-leading try-scorer earlier this year, at open side flanker and David Tameilau in the engine room at No. 8.

“We’ve come up with a team mix that is prepared for our own game and for an Ireland team that plays a game that’s very quick and well-rehearsed,” Mitchell said.

With the Emirates Airline Summer Series continuing in Georgia and a set of Rugby World Cup 2019 Qualifiers against Canada slated in the next three weeks, several players miss out in the Irish game-day squad due to fitness concerns. Luke Hume and Titi Lamositele were ruled out of camp altogether with injuries, with the prop replaced in camp by Newcastle Falcons professional Paddy Ryan. Ryan could make his international debut from the reserves.

Experienced forwards Andrew Durutalo, James Hilterbrand, and Joe Taufete’e are also available from the bench. Half backs Shaun Davies and Will Magie could provide a creative impetus as the match progresses, as well, with hard-charging recent college graduates Bryce Campbell and Matt Jensen looking to make an impact in what would be their sixth and third appearances, respectively.

Last time on U.S. soil, Ireland ended an 18-match winning streak held by the New Zealand All Blacks. The November 2016 match has been followed by a 5-3 record in eight tests, including another 18-match-streak-ending defeat of RBS 6 Nations Champion England. Though there are experienced Irishmen currently in the southern hemisphere with the famed British and Irish Lions touring squad, the Ireland squad taking the field at Red Bull Arena will be a formidable opponent able to replicate a World Cup-type matchup at a 25,000-seat stadium equally as qualified to host the match.

“It’s fantastic that the guys are getting an opportunity to play in front of a big audience; they deserve to be on that stage with the work they’ve put in and the results they’re capable of,” Mitchell said. “It’s essential for us as USA Eagles to play against one of the top-three sides in the world. They have recently beat New Zealand and England, so being a top-three side does not come easily or without reason. Clearly they’re doing something extraordinary under Joe Schmidt. All we can do is focus on what we can control and bring the necessary intensity with it.”

Limited tickets are still available for the game at Red Bull Arena, which is scheduled to kick off at 5 p.m. ET. The match will be broadcast live on NBC Sports Network, with access on the NBC Sports Live Extra streaming application available with valid credentials.