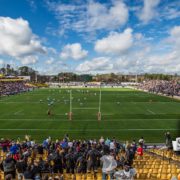 LAFAYETTE, Colo. – The 12th-ranked national rugby union team of Georgia will visit Kennesaw, Ga., for a June 17 test match against the USA Men’s Eagles as part of the Emirates Airline Summer Series.

The Eagles’ second test match of the Emirates Airline Summer Series – following the June 10 matchup with Tier One Ireland at Red Bull Arena in Harrison, N.J. – will be held at Fifth Third Bank Stadium at Kennesaw State University. Pre-sale of tickets will begin Wednesday, March 22, at 10 a.m. ET, lasting until 11:59 p.m. ET Thursday. To receive notifications of pre-sale and general on-sale ticketing information, sign up for the USA Rugby Ticket Pre-Sale Email List. Tickets will be available to the general public beginning Friday, March 24, at 10 a.m. ET.

“We are excited to come back to Atlanta and look forward to the support of all of the fans in the southeast as we take on a formidable international opponent in the Georgia Lelos,” USA Men’s Eagles General Manager Dave Hodges said. “The award-winning field at Fifth Third Bank Stadium at Kennesaw State University will provide a first-rate surface for the match and should facilitate an exciting event for the fans. We eagerly await the challenge of the Lelos and relish the physical nature of the encounter that is USA versus Georgia.”

Fifth Third Bank Stadium, located on the campus of Kennesaw State University, can seat more than 9,000 spectators for an international rugby match. A near sell-out was recorded at the most recent test in 2014, when the Eagles defeated Uruguay in the second leg of a home-and-home series to qualify for Rugby World Cup 2015. The U.S.-hosted leg of the HSBC World Rugby Women’s Sevens Series called the venue home for three years between 2014 and 2016, while the 2015 USA Rugby College National Championships’ five matches were also held at the stadium.

The venue has won Sports Turf Managers Association’s “Field of the Year” award for two years running for its natural 419 Bermuda grass. The venue is home to Kennesaw State University’s football and women’s lacrosse and soccer teams as well as the professional lacrosse team Atlanta Blaze. The multi-purpose facility hosts concerts, festivals, club and intramural sports bringing more than 200,000 fans annually to the park. Located within 30 miles of downtown Atlanta and 40 minutes of Hartsfield-Jackson Atlanta International Airport, Fifth Third Bank Stadium is easily accessible to locals and out-of-towners alike.

The Eagles will face Georgia in an international rugby match for the first time since the fall of 2013, and for the fifth time overall in Georgia’s 201st test match. Holding an overall record of 122-7-71 and an automatic qualification spot for Rugby World Cup 2019, Georgia will be coming off of an international encounter with Canada June 10 when it arrives in the state of Georgia.

Head Coach John Mitchell’s Eagles are currently on a five-match unbeaten run, having won the Americas Rugby Championship with four wins and a draw, and will look for a fourth all-time victory over their European opposition in Kennesaw. The June 17 Emirates Airline Summer Series clash will be the final preparatory match for the U.S. ahead of a Rugby World Cup 2019 Qualifier series with Canada slated for June 24 and July 1.

“We are looking forward to the new challenges of our Summer Series schedule, playing the likes of Ireland – who’ve beaten both the All Blacks and England – and Georgia, who have deservedly earned 12th place in the world, reaping the benefits of a centralized system,” Mitchell said. “Their strengths rely heavily around their scrum, and we have also grown significantly in that area of the game.

“We feel these two teams will help us prepare for all of the game dimensions that will come our way in Rugby World Cup Qualifiers. We will be striving for excellent performances against them that will dictate and lay a building platform for our RWC Qualifiers against Canada later in the month of June.”

Tickets for the Emirates Airline Summer Series match can be accessed at USARugby.org/Tickets. USA Rugby will host an official tailgate on the stadium grounds prior to the event; spectators may purchase tailgate parking with their event tickets. Details of broadcast arrangements for the match will be announced in due course.