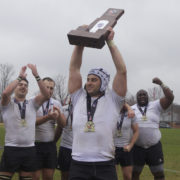 “We work hard all year and this is what hard work is all about – just getting here to the National Championship and showing what we got,” Whitewater full back and All-American Garrett Shibilski said. “Everyone just works hard all year; hitting the gym and the little things we do that finally paid off after a third year.”

Shibilski finished off a powerful back-line move from a seventh-minute scrum within 10 meters of the Furman try line to open the scoring. Center Levi Van Lanen kept a tight grip in contact in the middle of the field before offloading to No. 15, whose line turned around the defenders for a 7-0 lead.

Perhaps benefitting from the big-game experience, Whitewater looked to pile on the points in the ensuing minutes, but went up against a stern Paladin effort. The proverbial home team battered the Warhawks’ defense and won a 23rd-minute penalty to jump on the scoreboard at 7-3.

Whitewater’s class and efficiency at the set piece slowed Furman’s momentum, however, as wing Alec Treuthardt rounded the defense from a 36th-minute scrum and doubled his tally four minutes later to send the Warhawks into the break with a 17-3 lead.

Furman scored from its own scrum 10 minutes into the second half, securing the ball well on a slippery field before wing Branch Hunter spotted a gap to the inside and eluded six defenders for a 17-8 score line.

Furman prop Robbie Greco ended a series of crash balls on the Whitewater try line with a score in the 67th minute after Van Lanen had extended the Warhawks’ lead, and flanker Conor Bell capped off the match with a try by picking off a bobbled pass to score under the posts and bring the final score to 29-13.