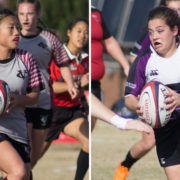 LAFAYETTE, Colo. – It is a busy weekend for the 16 teams still in contention for the 2016 USA Rugby Women’s Division II Fall Championship, with four locations hosting Round of 16 and Quarterfinal matchups Nov. 19-20.

Vassar College hopes to reach another Semifinal after last year’s campaign, and will have home-field advantage on its side in the Northeast Regional. Fellow New York-based schools University at Albany and Buffalo State University will join University of Vermont in keeping the Brewers from the Championship event at Furman University Dec. 3-4.

Vassar College vs. University of Vermont

Vermont’s only loss of the New England Wide fall 2016 season came at the hands of fellow Round of 16 qualifier Coast Guard Academy, a humbling, 45-0, defeat in Week 1. That does not mean the year was a cake walk, however, as the Catamounts won twice by just seven points and had two forfeits benefit their schedule.

Not having consistent competition could cause some teams to struggle going into knockout play. Not Vermont, which was more than ready for the challenge brought by Roger Williams University in the play-in game last weekend. The 24-12 victory will give the Catamounts confidence in their credentials to belong in this year’s playoff bracket, but it will be an entirely different animal taking on Vassar on its home turf.

One of last year’s Semifinalists, Vassar has already set a winning precedent against the Catamounts. The Brewers defeated Vermont in the 2014 National Championship playoffs, also at home, before falling to Kutztown the next day. They also won the 2015 matchup. Both teams will have had shakeups throughout the roster, of course, with Vassar losing two of its most potent offensive weapons from 2015.

Darienne Jones and Cierra Thomas lit up the Tri-State Conference and USA Rugby playoffs last season, finishing the 22-game year with a combined 235 points scored. Their graduations have left a big hole for the Brewers to fill – which they have with an average of 59 points scored in nine matches leading up to last weekend’s play-in win against State University of New York, Geneseo – but there were other facets of the Tri-State Champion’s game that needed fixing.

“The good news is that we returned nine of the 15 starters from fall 2015, and they have worked hard to maintain the standards attained,” Vassar Head Coach Tony Brown said. “We have focused more on defense since we seem to be able to score enough points to win games.

“The game against West Chester University (the team’s only loss thus far) was a big disappointment and it certainly reminded us that we have to get organized quicker when teams have a number of speedsters.”

Brown said the Round of 16 matchup will come down to tackling and winning the battle up front. With options at the back that include the potent trio of wing Abby Alexander, center Laila Bloomenthal-Rothchild, and full back Rachel Elson, the forwards will want to get the ball out of the pack quickly.

Tri-State runner-up Albany’s two losses to Vassar – one at home and the other in Poughkeepsie for the Conference title – gave the Great Danes a benchmark to reach come Fall Championship time. In the play-in against New England Small College Champion Colby College, Albany avenged last year’s loss at the same stage by traveling to Maine and winning, 34-12.

Known for its aggression in the tackle area and hard running from the backs and forwards, the Great Danes will need to continue playing to their strengths to advance further than their 2015 campaign.

The Banshees out of Buffalo State finished their Upstate New York campaign with an 8-0 regular season record and a Conference title, giving up no more than 10 points to in-conference opponents not named Geneseo. They then put up 61 points on a Rensselaer Polytechnic Institute team that troubled the best of the Tri-State Conference, including Albany.

The in-state location of the Mid-Atlantic Regional for three of the four teams competing should allow the teams to play their best rugby, building rivalries to take into future seasons in the process.

The power and skill of Montana State has been on display in both 15s and sevens the past couple of years, with several All-Americans in each code coming from the program. There are no national trophies in the Rocky Mountain champion’s locker, however. The Bobcats can thank Winona State for the lack of a 2015 Fall Championship Final appearance after the Quarterfinal loss a year ago, even if Winona State was unable to conquer Davenport University.

The majority of Head Coach Ed McKenna’s back line has returned from the previous season, as has two members of the forward pack. Fourteen of the student-athletes traveling to Nebraska this weekend were not with the team in Colorado Springs for the loss, but that does not mean they are unfamiliar with the team’s recent history.

“It’s a mixed bag,” McKenna said in regards to the roster, “but the new players are aware of who we lost to and why we lost.”

Montana State is not one to make excuses; the playoff defeat to Winona State had as much to do with the opposition as it had to do with the Bobcats. As McKenna put it, “the only team that can beat them is them.

“While reviewing film can help when a team is really good at, or focuses on one thing – like Winona State ‘jackalling’ at the breakdown – it’s really up to our players to execute our game plan.”

Sophomore center Maria Michelloti was a member of the AIG Women’s Collegiate All-American Sevens team this summer, while junior fly half Dallas Flager missed out on the national team assembly with an injury. Senior wing Emily Dennis and No. 8 Korbin Duvall captain the squad with plenty of playoff experience; the 2016 postseason berth is Duvall’s fourth with the program.

The freshmen in the team have bought into the game plan to great effect, with four first-years in the starting pack. The team’s goals for the year were to win the Rocky Mountain Conference title, reach the playoffs, and advance further than the 2015 Bobcats. They are on track so far, but are not counting any eggs before Saturday’s match against La Crosse and any potential match to come Sunday.

“They have all the experience and skills,” McKenna said of his team. “It’s now execution, heart, and commitment. If they don’t bring those things, we lose.

“We’re traveling with 24 players. We drive far distances all year long, and we should be smart and experienced enough to know how to recover. If we’re not, that’s on all of us.”

La Crosse is bringing its own championship belt to the Round of 16 after winning the Great Waters Conference despite losing to sister school Eau Claire in the middle of September. The loss was a motivational defeat, if anything, because the Eagles rattled off three wins with a combined score of 187-24 to finish the regular season and win the conference.

It was Marquette University that suffered the biggest loss to its in-conference rival, a 97-5 defeat a week before the play-in round. Both were required to win a first-up knockout match – La Crosse defeated St. Cloud State University, 57-12, and Marquette beat Western Illinois University, 39-15 – but only La Crosse will be playing in Nebraska this weekend. Marquette forfeited its Round of 16 matchup against 2015 Fall Championship runner-up Winona State, giving the Black Katts a bye to Sunday’s Quarterfinals.