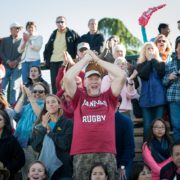 LAFAYETTE, Colo. – Venues for the 2016-17 College Spring Playoffs have been announced, featuring five hosting schools and a first-time rugby facility.

“We are excited to have a collection of great host venues for our 2017 Spring Playoffs,” USA Rugby National Championship Series & Competitions Manager James Wilber said. “In addition to returning to a number of venues that have hosted events in the past, we are also pleased to announce venues that will allow us to exhibit the game of rugby at new locations and to new audiences.”

Life University recently hosted the 2016 Women’s Premier League Championships at its rebuilt Lupo Family Field. The school’s women’s team – along with 15 competitors – will be playing for a Women’s D1 Elite or Women’s DI championship. Those DI teams will travel to regional locations in Marietta; State College, Pa. (Pennsylvania State University); Palo Alto, Calif. (Stanford University); and Davis (University of California, Davis) for April 21-23 Round of 16 matchups. Eight losing teams will see their playoff runs end, with the eight Round of 16 winners pitted against each other that weekend to determine the D1 Elite/DI divisional breakdown for the championship events.

Women’s D1 Elite Semifinalists will play two matches at the May 5-6 event at Life University for a National Championship, while the final four teams in the Women’s DI bracket will compete for a Spring Championship.

The Quarterfinal round of the Men’s D1AA postseason will commence April 8-9 in Bellingham, Wash. (Western Washington University), and Spartanburg, S.C. (Upward Star Center). Upward Star Center, featuring 60 acres of natural grass and artificial turf outdoor playing surfaces in addition to indoor training facilities, will also host eight Women’s DII teams in the competition’s Round of 16. The remaining DII Round of 16 matches will be held at Western Washington University that weekend.

Semifinalists for both Men’s D1AA and Women’s DII will convene at Stanford University April 22-23 for the respective Spring Championships. Winners will match up with Notre Dame College and Davenport University, respectively, in Marietta for the National Championships.

The 2017 USA Rugby College National Championships at Life University will be broadcast live on The Rugby Channel. More details regarding regional seeding and matchups will be determined in due course.