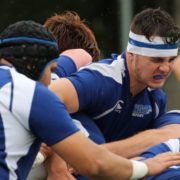 Competing in the Midwest Regional at Eastern Kentucky University in Richmond, Ky., Bowling Green smashed Mount St. Mary’s, 78-20, Saturday, Nov.19, to set up a Semifinal fixture against Lindenwood-Belleville. Inside center Adam Regini’s two tries helped the Falcons sprint out to a 45-3 lead by halftime. Mount St. Mary’s would score the first 12 points of the second half before Bowling Green returned to the offensive. Regini added a third score and was followed by Chris Labadie, Alex Cranmer, Phil Bryant, and Andre Slonkosky to cap the 58-point blowout.

Awaiting the Falcons was a Lindenwood-Belleville team that had to work much harder for its Quarterfinal win. The Lynx built a 32-19 lead 70 minutes into their Quarterfinal against James Madison, only to see the Dukes claw back to take their own, 34-32, advantage down the stretch. Lindenwood-Belleville, however, was able to put itself in position to send JP Aguirre into the try zone for an exciting, 37-34, victory.

Any wear and tear remaining from its win over James Madison was not present during the opening phases of the Lynx’s Semifinal clash with Bowling Green. In fact, Lindenwood-Belleville took a quick, 12-0, lead before the Falcons were able to make a few adjustments.

The momentum began to swing in Bowling Green’s direction when Cranmer scored his second try of the weekend to get his team on the board before halftime. Mistakes and stout defense highlighted the second half, as neither team was able to turn positive territory into points for the first 30 minutes of the second period.

In the end, it was the more experienced Bowling Green side that withstood second-year program Lindenwood-Belleville. The Falcons scored a trio of tries by Ryan Steinmetz, Chris Labadie, and Jacob Donato in the final 10 minutes of the game to win, 22-12, and punch their ticket to the Sunday, Dec. 4, Championship game.

Only Bowling Green’s 78 points put on Mount St. Mary’s were more than the 71 Notre Dame College scored on Syracuse in the Midwest Regional Quarterfinal shutout of the Orange. Eight different Falcons found the try zone, including flankers Cullen Barelka and Cian Grendon, who each scored two, and reserve back Torin Tuppien, who came on to record a second half-hat trick.

Cincinnati continued to make inroads as a rugby program when it beat St. Joseph’s in the other Midwest Quarterfinal to set up its Semifinal encounter with Notre Dame College. In the 21-10 win over the Hawks, Cincinnati forwards Andrew Beitman and Jared Meyer dotted down, as did winger Andrew Bard, while Grant Gallagher added two successful penalty kicks.

Sunday’s dramatic drop in temperature saw freezing temperatures take over Founders Field, and made it much tougher for Cincinnati and Notre Dame College to play the running rugby they prefer. In the Semifinal, the Bearcats were able to take a 5-0 lead late into the first half, but Falcon eight man Andrew Guerra tied the game on the half’s final play.

Lock Spencer Duncan would add a second try for Notre Dame College, which would be enough to qualify the team from South Euclid, Ohio, for the D1AA Fall Championship.

Bowling Green and Notre Dame College will now square off Sunday, Dec. 4, at 9 a.m. ET from Furman University. The Fall Championship Final will be aired free of charge on The Rugby Channel, with the Dec. 4 winners advancing to the May 7, 2017, USA Rugby College 15s National Championships to face the eventual winner of the Spring D1AA Championship.