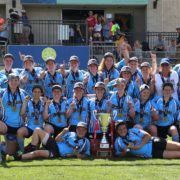 Scoring two tries and successfully kicking two penalties in addition to a physical presence on both sides of the ball, Williams was named Most Valuable Player in the Final. Only three points were scored in the final 40 minutes as each team left it all out on the field of play.

“We’ve had a lot of adversity on the run up to get here and we’ve been pushed to the brink at times,” Williams said after the match. “That helped us today. [San Francisco Golden Gate is] the toughest team we’ve played all year. We just had a little bit extra today but they were fantastic.”

Scylla took a few minutes to get up to speed with Golden Gate, whose fly half, Lindsay Kinsler, missed a close penalty kick six minutes into the game. After answering the call with a penalty kick of her own in the 11th minute, Milwaukee center Williams forced her way through half of San Francisco’s defense to open the scoring. Consisting of four or five fends, the try-scoring run from 50 meters out extended Scylla’s early lead to 8-0.

Milwaukee will rue the try it conceded minutes later as Erika Haro spotted a big gap in the defensive line for an 8-5 score line. Williams would extend the lead back to six points at 11-5 with a kick midway through the frame, however, and was one of several big tacklers keeping San Francisco from a flowing game plan.

Roseline Okpara blew that plan wide open with a big run from a scrum in the 29th minute to give San Francisco a necessary platform to attack, fending three defenders on her way to the 22. Golden Gate bunched up the area around the ruck 10 meters from the attacking try line and moved the ball quickly to the backs. Erika Haro did well to get her offload from the ground to Sara Maurer, who stood up two tacklers for the 12-11 try.

Golden Gate found room to run in the 33rd minute through Haro, but allowed Scylla to clear with a kick following a turnover. The California team then lost the lineout at midfield and was put at a further disadvantage when Tyra Norlander was sent to the bin. Williams did not need the extra room on the field to push her way through the defense, however, replicating her first solo effort with another in the 38th minute to restore Scylla’s lead at 16-12.

Beyond the 40th minute in the first half, Kinsler called for the tee near midfield to draw some extra time off of the sin-bin session. The kick was well off target to keep the score at 16-12 heading into the second half, but the Golden Gate fly half redeemed herself with a kick four minutes into the second frame, 16-15.

The score remained through 30 minutes of the half as the teams found their scoring opportunities shut down by self-inflicted errors or defensive prowess from the opposition. Kinsler missed a kick that would have given her side a lead in the 61st minute before a forward pass nullified Scylla wing Loren Schlei’s apparent score in the 68th minute.

San Francisco found the ascendancy late in the game, and, a phase after Milwaukee received a verbal warning from the match official, Scylla prop Kerry Goss was sent to the bin for illegally halting a Golden Gate attack at the 22. Kinsler’s initial kick from a makeable distance missed wide, and Scylla won a turnover after Golden Gate found its way into the attacking half from Milwaukee’s clearance kick.

Territory was up for grabs in the final minutes as San Francisco kept the ball moving in the attacking half, but lost the ball forward on the ground in the tackle area for Milwaukee to drain the clock with a scrum one last time. Scylla, dominant in that particular set piece throughout the match, won a penalty and kicked to touch to bring the game to an end.