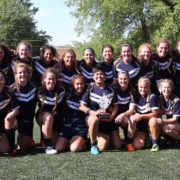 Both teams had won competitive Semifinals Friday in the Peach State, and took a few minutes to find their legs. Davis wing Rebecca Lehman’s run down the touch line in the 17th minute gave the Aggies useful field position, and full back Carlie Watt fed wing Prai Harris for the opening score, 5-0.

Davis was secure in its possession but not afraid to play the ball quickly. Most Valuable Player Sydnee Watanabe looped with fly half Caitlin Reid in the 36th minute to send the ball out to Watt on the wing. She was swung around on the touch line and able to offload to Elizabeth Wilkinson, who kept the ball in play as she was taken out, as well, for Harris to slide into the try zone.

The Falcons would find their way onto the scoreboard on the last play of the half following a barrage on the Davis try line. The Aggies were cited for slowing play down and eventually conceded a penalty try for not being back 10 meters from the point of the quick tap. The conversion was kicked successful for a 10-7 Davis advantage after 40 minutes.

Notre Dame earned its first lead of the match just minutes into the second frame with an extended possession. All it took was simple passing through hands along the 22 to create the space in front of Lea Walsh for the 12-10 try.

Davis nearly regained the lead five minutes later if it were not for a forward pass between Lehman and Watt, but continued offensive movements in Notre Dame’s half drew several infractions that benefitted the second-half effort. Falcons hooker Kayla Rudman was shown a yellow card for multiple penalties in the 59th minute a phase before full back Alex Strasser saved a try with a tackle into touch. A high tackle forced another Falcon into the sin bin for a two-player advantage to Davis for six minutes.

Notre Dame did well to defend a scrum in its defensive third of the field to force a turnover, but could not clear before Watanabe ran at the defense. The center’s line drew multiple defenders, enough to give Lehman a lane to the try zone for the 15-12 lead. Once they had their full complement of players on the field, the Falcons conceded again as Harris outran Sarah Tomasulo for an offload to Watts, 20-12.

Falcons scrum half Danielle Walko-Siua singlehandedly gave her side a lifeline two minutes from time when she took a quick tap from the 22. She knocked over one defender before fending a second to dot down under the posts. The conversion was taken quickly to bring the Falcons within one point at 20-19, but Davis did not allow Notre Dame to escape its half in the final seconds of play and added a final score for the 27-19 victory.