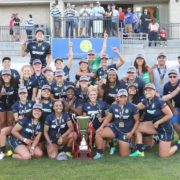 “We try to be a very dynamic team, move it sideline to sideline, and want everyone to power through tackles, pass, and do everything to make themselves threats on the field,” Gladiatrix prop Catie Benson said. “Raleigh pressured us from the beginning, which we hadn’t seen during the season. They made great tackles and were very physical.”

Venom full back Jazamine Gray lost an unfavorable matchup with Gladiatrix flanker Mele Taumoefolau for the first points of the match. Following an initial tackle by Raleigh on its opening restart, Cameo Motley found a huge gap in the opposition’s defensive line 10 meters from her own try line. Foster supported her full back to pass the 10 before Taumoefolau fended one defender to create a break at midfield. Gray was the last line of defense, but was kept at an arm’s length three times by the opening try-scorer.

Having seen the capabilities of Life West straight away, Raleigh found its defensive footing through the ensuing 10 minutes. Even after losing the ball in Life West’s half, the Venom held Cairns and the Gladiatrix backs from scoring before forcing the ball down field. The defensive work paid off as Raleigh capitalized on an attacking scrum inside the attacking 22, where two offloads in contact led to space for Cerrin Eldridge to dot down in-goal. Chelsea Garber’s conversion gave Raleigh a 7-5 advantage after 15 minutes.

It did not take long for Life West to reclaim the lead with ball in hand in the attacking half within 30 seconds of the restart. Morgan Rovetti’s unbelievable, upside-down offload 10 meters from the line found Hali Deters for Jenn Sever to take over for the 10-7 score.

Garber leveled the match in the 19th minute with a penalty kick, but the first-half wheels fell off for Raleigh after that. Three minutes later, Kayla Thompson was sent to the sin bin for a high tackle, and Life West would cross the try line three times. Foster tapped from the spot of the foul and Mirelle Raza shrugged off two tacklers from the touch line a phase later for a 15-10 Gladiatrix lead.

A 27th-minute lineout for Raleigh was not thrown straight at its 22, and Life West fly half Mata Hingano looped around Naber to free Foster for a dummy, fend, and try from the Gladiatrix’s set piece. Though she missed a fourth consecutive conversion from a tough angle, the wing latched onto a poorly-place cross-field kick by Garber to rush into the attacking side of the field. She was tackled but Hingano supported the breakdown to bounce off of a defender into the try zone. Foster converted from in front to extend her side’s lead to 27-10.

Just before Thompson was released from the bin, her teammates botched a lineout at midfield. Naber capitalized on the opportunity with a dummy at the gain line and a glide through several tacklers before providing the try-scoring offload to Deters in the face of sweeper Gray, 34-10.

The second half was much closer, with Raleigh crossing the try line first 10 minutes into the half through substitute Megan Gilmore. The Venom could do nothing against a 14-player Life West side after Foster was sent to the bin in the 64th minute, however, instead conceding a dagger of a try in the 68th minute. Benson played a one-two with Sever once substitute Angelina Lomu brought the Gladiatrix into scoring territory, with the prop finishing off the scoring play for the 39-17 score line.

The Gladiatrix saw out the remaining time on Foster’s sinning and watched two tries go begging, with Taumoefolau’s 79th-minute try called off due to too many players on the field and Cairns not dotting down quickly enough for the Venom to knock the ball out of her hands on the final play.