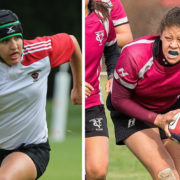 Furman University hosts the Semifinals and Finals of the DII Fall Championship Dec. 3-4 in addition to the final playoff games in DI and Men’s D1AA and DII play. Winona State University, a finalist from last year’s event in the Palmetto State, is also one step away from a return trip to the Final with a Semifinal clash with Coast Guard Academy scheduled for Saturday afternoon. All four championship matches Sunday will be broadcast live on The Rugby Channel.

Bloomsburg University put a scare into the Panthers in the 2015 Semifinals, running out to a 26-5 first-half lead before being overpowered by the potent offense of Davenport in a 43-26 result. Now-seniors Hunter Moreland, Danielle Ordway, and Hannah Tennant combined for 33 points in that second half and a further 17 points in the 27-22 final win over Winona State.

The veterans helped lead a younger Panthers team to a one-loss fall campaign this year – the loss to Notre Dame College. Davenport has not appeared vulnerable in any of the seven victories, including the two playoff wins at the Midwest Regional in Cincinnati. Whether or not they were tested on the field of play, the Panthers battled their own adversity in having their only home fixtures in the first two weekends of the fall season.

The road warriors now head to South Carolina, where a similarly-potent attack from Vassar could pose problems for Davenport. The Brewers have scored an average of 59 points through 12 games this fall compared to the Panthers’ 81 points scored, with senior fly half Mary-Margaret McElduff leading the way with 135 points.

It can be said the teams will not be focusing too much on their attacking structures, instead preparing the offenses the same way they have all season and shoring up the defensive systems for the most challenging matchup yet.

“If you haven’t played defense for a dozen phases straight, then it’s not as familiar to your players,” Vassar Head Coach Tony Brown said. “We’ve set our practices, but the difference between practice and game is a difference in standards.

“The main thing is you need to stop the other teams scoring. Davenport definitely has some decent players. They’re probably thinking they can score and we think we can score. I just want a top-quality game.”

Davenport’s cohesive, physical forward pack will look to take control of the Semifinal early with the kind of bruising runs that led to the 2015 title. Vassar, on the other hand, would like to stay out of the set-piece battles and get the ball to a dangerous back line, where three backs – wing Abigail Alexander, center Laila Blumenthal-Rothchild, and full back Rachel Elson – have racked up 135 points between them.

“If it becomes a very static game, a slow game, I think that’ll suit them (Davenport) because they have a big, strong pack,” Brown said. “They’ll probably prefer that. We’re definitely a side that doesn’t want it to be about scrums and lineouts.”

Winona State had its own lead over Davenport in last year’s Final, albeit for just a few minutes at 5-0. The match was a disappointment as any loss would be to a top team, but Head Coach Josh Krzewinski said the memories are strong for those still with the Black Katts.

“Last year’s loss has kept a fire in their bellies; to get more fit, to spend more time in the gym, and work harder day in and day out,” he said. “It’s created a great bond between the girls as they push each other to become better.”

The team is younger than last year’s Fall Championship Finalists, and reborn with returners learning new positions to improve the team’s depth and effectiveness. The game plan for the West Regional weekend in Wayne, Neb., seemed to work just fine, especially after receiving a bye through to the Quarterfinals due to a forfeit by Marquette University. Montana State had expended plenty of energy in its 70-12 defeat of University of Wisconsin, La Crosse, and went into the Quarterfinals with a daunting, repeat task of beating Winona State.

“At first we were disappointed in the forfeit because we simply needed game time, but it worked out for us,” Krzewinski said. “Coming in fresh to the match up with Montana State was certainly advantageous to us. We were able to watch them compete on Saturday, which allowed for some prep time before our Saturday training session and meetings to go over our keys to the match.

“We knew from last year that Montana State were good tacklers, so we needed to be quick to the breakdowns and drive through the ruck. We wanted to dictate the pace of the game, so we tried to alter our attack so we could disorganize their game plan. Defensively, we wanted to come up fast and force them into passing and handling mistakes.”

The Black Katts’ coach pointed to AIG Women’s Collegiate All-American and team captain Lanoira Duhart as as a main factor in the team’s follow-up successes this season with leadership capabilities and the skill to rival any collegiate player in the country. She has helped to bring the team together as one cohesive unit rather than 15 or 23 individuals, an important step a team must take to build a long postseason run.

Looking to cut short Winona State’s return trip to the Fall Championship Final is Coast Guard, which has already busted up the Semifinals party by beating Bloomsburg – the only 2015 Semifinalist not in play this weekend – in the Round of 16. The Bears finished the weekend strong, too, beating a tough Saint Michael’s College team in the Quarterfinals.

“Many of our players were at Vassar last year, and that experience helped us realize what it takes to make it through a doubleheader,” Academy Head Coach William Anderson said in reference to his team’s Round of 16 loss to the regional host in 2015.

Coast Guard swept through its early fall schedule with ease, going five games without conceding a single point and letting in just five points in seven games. The beauty of the playoffs is momentum can only carry a team so far against an opponent it has not seen before, and the Bears tested their championship credentials in Poughkeepsie, N.Y.

“We learned to adapt to two very different styles of play in the Round of 16,” Anderson said. “Recognizing what we’re being offered and making adjustments as we go will be a useful lesson to carry forward.

“Our team’s ability to work together and their awareness of each other on the field will help carry us. Throughout the years we have always strived to be one cohesive unit, but, this year, we fully captured that and more. We are expecting the most demanding matches that we have had this weekend.”

It is Coast Guard’s first foray into the Fall Championship Semifinal stage, and the entire program is along for the ride. Thirty-five players are traveling to Greenville, with team morale reportedly at an all-time high. The Bears will have to have respect for the opposition come Saturday if they are to return to Connecticut with a trophy Monday.

Reigning Fall and National Champion Davenport faces Vassar in Saturday’s first Semifinal matchup at 1 p.m. ET, with the Winona State-Coast Guard clash to follow at 3 p.m. ET. Both matches will be broadcast live on The Rugby Channel, as will Sunday’s 3 p.m. ET Final.