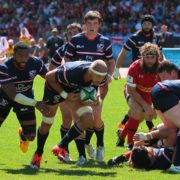 LAFAYETTE, Colo. – The USA Rugby Selects will participate in the brand-new Americas Pacific Challenge, supported by World Rugby, in Montevideo this October alongside Argentina XV, Canada A, Fiji Warriors, Samoa A, and Uruguay A.

The U.S.’s rugby union XVs development side last assembled in South America in early 2015 as the national team entered the final stretch of Rugby World Cup 2015 preparations. The inaugural Americas Pacific Challenge was created to supplement the Americas Rugby Championship and Pacific Nations Cup competitions, as well as the teams’ November Internationals, which will kick off less than a month later.

The launches of the Americas Rugby Championship competition and first professional rugby league in the United States, PRO Rugby, have given the broader domestic talent base increased opportunities at higher competition levels in 2016, and the Americas Pacific Challenge will continue to provide nations in the Americas and the Pacific comparable match time for their developing player pools in years to come.

“We need our athletes playing meaningful rugby, and we are grateful to World Rugby for assembling the Americas Pacific Challenge competition for this fall,” USA Rugby Chief Executive Officer Dan Payne said. “Our younger, less experienced players now have an extra shot to prove themselves for future selection.

“While the creation of this competition improves the outlook for those on the edge of Eagle selection, it will also intrigue the younger generation of athlete that ponders a place in international sport. Young rugby fans in the United States can witness future Eagles and place themselves in those shoes to fuel their own drive.”

The Selects team has long been a valuable piece of the national team pathway, graduating Eagles such as Chris Baumann, Cam Dolan, and Ben Landry for future international honors. It was a Selects side in 2013 that turned the tide of senior superiority in the border war between the U.S. and Canada, defeating the rival in that year’s Americas Rugby Championship A-side tournament. The Eagles have beaten Canada’s senior side in all four opportunities since, a trend it will build towards continuing prior to the Feb. 18, 2017, Americas Rugby Championship matchup north of the border.

As an A-side development team, it is unlikely captain Blaine Scully and other professionals like Samu Manoa and AJ McGinty will be released from their overseas clubs to the Selects for the Americas Pacific Challenge. Details around the USA Rugby Selects squad and coaching staff will also be finalized before the team assembles.

Twenty-six athletes will be named to the Selects side that will head to camp in West Palm Beach, Fla., Oct. 1-4, before leaving for Uruguay Oct. 5. Grouped with Argentina and Samoa’s development sides in the six-team competition, the Selects will face Fiji Warriors (Saturday, Oct. 8), Canada A (Wednesday, Oct. 12), and Uruguay A (Sunday, Oct. 16) in an eight-day span.

Tournament broadcast information will be announced by World Rugby and shared on USA Rugby’s social media channels in due course.