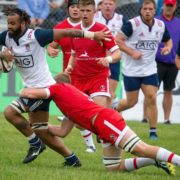 The All-Americans rebounded well from Tuesday’s 46-12 defeat north of the border, but did not have the gas to overturn the 34-point deficit needed to claim the spot on offer at the tournament in Montevideo, Uruguay. Canada wins the series with an aggregate victory of 71-39.

The All-Americans were given lifelines throughout the game as Canada’s scrum, previously dominant in the mid-week matchup, found penalty trouble under the keen eyes of American match official Mike O’Brien. Like they did Tuesday, the MJAAs found the scoreboard first with a penalty kick in the 11th minute.

Canadian fly half Will Kelly missed an opportunity to level the scoreline moments later with a kick from in front of the posts, but it did not matter as a 10-phase possession started with an Anton Ngongo break was finished over the try line by Cole Keith, 7-3.

The Canadian lineout did not struggle in the first half, and turned over a 23rd-minute set piece to score points despite being penalized for a high tackle. Full back Aidan McMullan broke down the wing and dotted down in the corner through a tackle for a 12-3 lead midway through the half. He won a penalty five minutes later to give Kelly the platform for his first successful penalty kick, 15-3.

Christian Dyer and Cristian Rodriguez continued to cause problems in open play, but the All-Americans failed to convert their try-scoring opportunities early. Only after matching yellow cards in the 36th minute to Harley Wheeler and Canadian center and captain George Barton – for a tip tackle and retaliation, respectively – did Dyer find the try zone, finding his feet from a tackle to cut into the Canadian lead at 15-8.

The teams played beyond the 40th minute in the opening half, with Canada scoring from a late turnover as Rodriguez attempted to break free along the touch line. After the match official cut short a Kelly try to an earlier penalty against the All-Americans, Canada set up a lineout and maul for hooker Dewald Kotze to bring the halftime score to 20-8.

A skip pass outside the 10 two minutes into the second frame put Peter Howard in a position to score, and the wing stepped out of a tackle to do just that for a 20-15 score line. Canadian flanker James O’Neill nullified five of the All-Americans’ points with a try five minutes later, however, putting Canada ahead at 25-15.

Daemon Torres, scorer of one of the All-Americans’ three tries Tuesday, reached over to bring his side within five points in the 62nd minute, 25-20. After scrum half Ruben de Haas was shown yellow in the 71st minute the MJAAs went after the game-day win, with Torres finding the try zone for the third time in two games. That tied the game before center Samuel Walsh’s successful conversion gave the All-Americans their second lead of the day at 27-25, but there was not enough time to mount a monumental comeback of 32 points to earn a spot at the U20 Trophy.