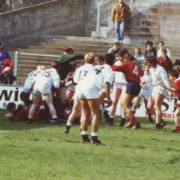 The Eagles were World Cup winners, but arrived in the United States to the harsh reality that most were not aware of their spectacular performances over in Wales. That was a battle to be fought at a later date, however, as there was a title to defend not three years on the horizon. The coaching staff of Chris Leach and Kevin O’Brien made way for a team featuring longtime coach and educator Emil Signes before Frenchman Franck Boivert, head coach at Stanford University – and previously of University of California, Los Angeles – signed on to lead the team through the ’94 World Cup in 1993.

Boivert, a leading mentor of the game out west, and the Eagles were thrown into the fire pit at the ’93 Canada Cup. A one-off Can-Am match in 1991 with the previous coaching staff resulted in a 13-12 victory for the U.S., but the Canada Cup – held 10 months from kickoff in Scotland – offered a Final rematch for the Eagles in a first-up matchup with England. Without much time to implement Boivert’s style of play, the Eagles lost their advantage over the Roses, 17-6.

“The messaging I was using was totally different than what they were using in the east, and the way I was coaching was pretty different than what was done previously,” Boivert recalled. “The players I had with the Grizzlies (select side) had no problem adapting because they knew my approach, but it took other players a bit of time to adhere to the new way of playing.”

England had no answer for the Eagles’ skill set in the forwards and backs when they were in possession, but even minimal turnover through 1993 highlighted a weakness to be exposed: the scrum.

“The main difference in that game was the scrum – purely a technical area we could not compete with,” Boivert said. “My assistant coach, Joe Kelly, was a fantastic prop and knowledgeable, but the competition structure [in the United States] did not allow our props to develop properly to go to the next step internationally.”

The opening loss was the only defeat for the Eagles in the tournament. Wales was shut out while host Canada conceded 60 points against its border rival in a fifth consecutive losing result. The forward pack was mobile and strong and the backs were deadly accurate with ball in hand, and began to institute Boivert’s philosophy. It did not come without a price, however, though it did give the players in camp – there was a b-side competition, as well – and Eagle hopefuls reason to increase their training intensity in the final months of the World Cup cycle.

“In the end the Canada Cup went pretty well and we managed to create a lot of dynamic and enthusiasm,” Boivert said. “Throughout the week they saw how [my philosophy] could be efficient. The players from the east that were reluctant in playing that system beforehand were very clear after the game: ‘That was great and we enjoyed it, but it was very tiring.’

“When they got it, then everyone was very happy with it and the results show.”