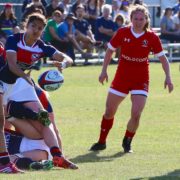 The head coach has made five changes to the starting XV that kept third-ranked Canada to 10 points through 40 minutes Tuesday, March 28, with Team USA Olympian Nicole Heavirland set to partner the Lindenwood University scrum half. Tickets for Saturday’s match – scheduled to kick off at 6 p.m. ET – are available for purchase online for $10, while the live broadcast will be available to subscribers of The Rugby Channel.

“The tough thing about Tuesday’s match is it was a game of two halves for us,” Steinberg said. “In the first half we were happy with our ability to launch and apply pressure defensively; we had the structure in the second half but weren’t able to launch. We’ve continued to make line breaks – we had six or seven Tuesday – but we only scored one try. What we’ve talked about is converting those opportunities against one of the best teams in the world.”

Pedraza replaced Joanne Fa’avesi in the middle of the second half of the 39-5 defeat, with the Olympian out of contention for Saturday selection as she goes through concussion protocol. The new No. 9 made her international debut in the substitute appearance, providing a threatening set of backs with quick ball in limited opportunities. Women’s Eagles Sevens stalwarts Naya Tapper and Kristen Thomas return to the wings, while Tuesday’s try-scorer, Alev Kelter, moves from outside to inside center.

Apart from the scrum half and semi-professional full back Jess Wooden, the back line was recently seen playing together on the HSBC World Rugby Women’s Sevens Series. Heavirland earns her first start with the XVs side since the 2015 Women’s Rugby Super Series encounter with New Zealand, while Ryan Carlyle will partner Kelter in the midfield at outside center.

“Because we want to play with width, we want someone who can really pass the ball,” Steinberg said. “Annakaren was called up to the seniors at the National All-Start Competition in the winter, played well there, and completely earned her start this weekend.

“As a team, we have consistently created a lot of opportunities out wide over the past year. One of the big focuses we’ve had is recognizing and executing those opportunities.”

Captain Tiffany Faaee returns to an unchanged front row alongside Catie Benson and Joanna Kitlinski, with Rugby World Cup veteran Stacey Bridges joined by the incoming Molly Kinsella. Though the Eagles have worked in the off days to offset a top Canadian scrum, a newer-look lineout performed capably. Flanker Christiane Pheil was successful on multiple occasions in the air on defensive and offensive throw-ins alike, and will have a new back-row partner in Sara Parsons to follow in open play. Women’s Premier League Championship Most Valuable Player Jordan Gray will continue to hound the Canadian defense from the back of the scrum at the No. 8 position.

The Eagles have stressed consistency in intensity leading to their final international test prior to Women’s Rugby World Cup 2017, which will kick off in Ireland in about four months. An 80-minute performance will be required against Canada, a team boasting a majority of the 2014 Final’s squad.

Canada’s 39-5 victory also puts the 2014 World Cup Finalist in good standing to retain the CanAm Cup, awarded to the winner of the rivalry matchup each year. The Eagles claimed rights to the trophy in 2015 with a victory in Alberta on Canada Day, while the border rival reclaimed it in Salt Lake City last year. The U.S. holds a slim, 18-17 advantage in the matchup that began 30 years ago.

Supporters planning to attend Saturday’s match on the South Field at the Chula Vista Elite Athlete Training Center are urged to purchase tickets in advance via EventBrite as they are available for $10. A fee of $15 will be charged on site, while those unable to attend can watch the match live on The Rugby Channel with a paid subscription. The 36th matchup in the Can-Am rivalry will kick off at 6 p.m. ET.