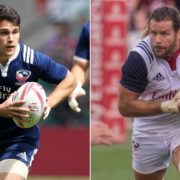 SAN DIEGO – Todd Clever’s final appearance in a U.S. jersey will come in Saturday afternoon’s Rugby World Cup 2019 Qualifier at Torero Stadium, the second leg of the matchup between the USA Men’s Eagles and Canada.

Head Coach John Mitchell’s squad is facing a winner-takes-all scenario for qualification to the ninth World Cup following last weekend’s 28-28 draw in Hamilton, Ontario. The July 1 match on the campus of University of San Diego is scheduled to kick off at 3 p.m. PT, with the exhibition match featuring the USA Women’s Eagles and first Women’s Premier League All-Star team to follow at 5:30 p.m. ET. Both matches are to be broadcast live on The Rugby Channel.

Clever, the U.S.’s all-time appearance leader, will retire with 76 caps and 73 starts for the National Team across five quadrennials. Scorer of 16 tries in his career, Clever recorded nine five-pointers in 18 games against the border rival. The flanker will have the returning Tony Lamborn alongside him in the back row along with Cam Dolan in the No. 8 position.

“At the end of the day you’re only as good as the depth in your group and we’re fortunate to have good depth,” Mitchell said. “It’s difficult to leave people out, but we have to try to create the best team mix with the way we want to play. We have to select people that are aligned with how we want to get the job done.

“There are some consequences for the performance and we’ve brought some other people in that we believe will make a difference with their skill sets.”

Nick Civetta scored two of the Eagles’ tries against Canada at Tim Hortons Field in the first leg. The lock’s second-row partner in five of his seven appearances, Nate Brakeley, returns to the starting XV. Chris Baumann has recovered from an injury that kept him out of last weekend’s match-day squad to complement the front row of hooker James Hilterbrand and Tony Purpura.

AJ MacGinty converted all four of the team’s tries June 24 to bring his career points total at the international test level to 147 in 14 appearances. Partnering scrum half Nate Augspurger from the fly half position, MacGinty will look to free the center pairing of Marcel Brache and Bryce Campbell Saturday. Ryan Matyas, initially named to the previous starting XV before an illness necessitated a change in the roster, will patrol one wing opposite Mike Te’o. Full back Madison Hughes receives his first cap for the XVs National Team since the November Tour of 2016 having finished the 2016-17 HSBC World Rugby Sevens Series with a third-best 279 points.

“If you look at the roster it’s probably the squad what was very much in our plans for the first game,” Mitchell said. “Ryan was sick, Tony [Lamborn] was unavailable, and Chris was recovering.

“I was really impressed with Madison on the November Tour last year. Obviously he has some niggles from the sevens circuit, so we had to manage him carefully. The medical team has done a fantastic job; I didn’t think we’d even see him on this trip.”

The Eagles capitalized on their time with possession against Canada in hostile territory, but surrendered a 10-point lead in a 10-minute time span. Though they remained unbeaten against the border rival in their sixth consecutive meeting, the Eagles are readying for the most important game of the past 17 months under Mitchell. Along with the team captain, the head coach will also be finishing his U.S. career in San Diego.

“A lot of it was our own doing,” Mitchell surmised. “We had to live off of other possessions rather than just field position and lineouts. We had plenty of it but our turnovers were too frequent to be able to build pressure. Saying that, our defense was good for long periods and we put ourselves in a position at 28-18 to win the game, but we let it go.

“They won the discipline on the day, as well. That discipline cost us with a couple defensive lapses. To be fair, it’s 0-0. Game on.”

Saturday’s match at Torero Stadium is being broadcast live to viewers in the United States on The Rugby Channel and to international viewers outside of the U.S. and Canada on World Rugby’s website. Tickets can be purchased online for just $20 until they sell out or Friday – when prices increase.