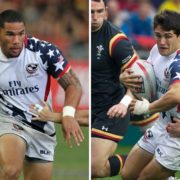 Bryce Campbell, Nick Civetta, and Men’s Eagles Sevens captain Madison Hughes will also receive an Eagle number after making their senior debuts for the Eagles against the New Zealand Maori All Blacks in Chicago as part of “The Rugby Weekend Presented by AIG.” Eagle No. 333, Todd Clever, will captain the U.S. against Romania in the nations’ eighth meeting Saturday, with the match scheduled to be broadcast live on The Rugby Channel.

Prior to the November Tour, 30 players had made their international debuts under Mitchell in six matches during the Americas Rugby Championship and Summer Series competitions in 2016. Clever, the most-capped Eagle set to appear in his 69th career test, holds the lowest number in the current touring team as well as the Eagles Elite Training Squad, and played in his first test for the U.S. in 2003.

The Eagles have qualified for seven of eight Rugby World Cups and have seen numerous internationals recognized for their play on the world’s stage, all while the country lacked a professional domestic competition and a full test calendar under Regulation 9. In context, Tier One nations such as England and New Zealand have well over 1,000 capped players.

“While our own team identity is important and personally, for Martin, it will stay with him forever, we must thank the USA Eagle predecessors that have all gone before him,” Mitchell said. “It’s quite a momentous day in the history of the USA Eagles, and for Martin and all the Eagles in the squad.”

Iosefo, a Rio 2016 Olympian for Team USA, reclaims his spot on the wing with incoming professional and vice captain Blaine Scully injected into the back line, while Hughes will start his first international XVs match at full back. Campbell, out of Indiana University, will move from outside center to inside center Saturday beside Thretton Palamo in a new combination for the midfield. Nate Augspurger and Will Holder will run the attack from the half-back positions of scrum half and fly half, respectively.

Joe Taufete’e, a reserve last weekend, starts at hooker between tight head prop Chris Baumann and loose head prop Titi Lamositele, with the latter scheduled to return to Saracens following the match in Bucharest. Civetta will also be returning to Newcastle Falcons, but not before he earns his first cap at lock Saturday next to Nate Brakeley.

Rugby World Cup veteran Al McFarland will stabilize the scrum alongside the captain in the loose, while Olympian Andrew Durutalo is set to make his first appearance of the November Tour at No. 8. Weighing in at more than 2,000 pounds, the pack will have the task of lining up against a sizable opponent that prides itself on strong set pieces in Romania.

“Our men up front are in for a huge challenge,” Mitchell said. “Romania realizes their strengths and we will have to be at our very best these areas of our game, as well. It’ll be a very physical exchange.”

In addition to the threats in the starting XV, several professionals unavailable for the sold-out match last weekend joined the team in Europe this week. Langilangi Haupeakui, the most recent American international to have signed a professional contract, is in line for his second Eagle cap in the reserves. Also back with the squad is Samu Manoa, who was last seen in a U.S. jersey at Rugby World Cup 2015. The two California natives will offer additional size and strength to the forwards, while Saint Mary’s College graduate Dino Waldren could make his debut in the front row.

Alex Maughan was unable to travel with the squad to Bucharest, necessitating the call-up of Rugby World Cup veteran Eric Fry. The University of California graduate starts Saturday’s match from the bench. Matai Leuta could add his name to the list of capped Eagles Saturday, as well, wearing the No. 23 jersey.

The Eagles have not lost a match to Romania since Rugby World Cup 1999 and hold a three-match win streak against the Oaks in addition to the 6-1 all-time record. Ranked one spot ahead of the U.S. in 16th, Romania has won seven of eight matches throughout 2016, the most recent against Argentina XV.