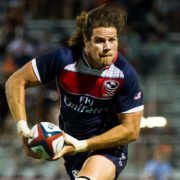 Kicking off at 7 p.m. ET with a live broadcast on The Rugby Channel, the Eagles’ second match of their four-game assembly follows last weekend’s defeat to No. 4 Ireland at Red Bull Arena. The U.S. scored three tries in front of 22,370 supporters in Harrison, N.J., and will use the match against the 12th-ranked Lelos as final preparation for the upcoming Rugby World Cup 2019 Qualifiers against Canada. Tickets can still be purchased for Saturday’s test via TicketAlternative.

“We were disappointed in our performance against Ireland,” Mitchell said. “Even though I thought Ireland played very well, we thought we were further ahead than that. It was very humbling and we identified some areas of our game that we’ve needed to learn from and fix quickly. It is our second team mix of the series – which is planned this way – and by the end of the weekend we would have given everyone test minutes except Madison Hughes, who we are managing to gain fitness in the 30-man squad.”

Try-scorers against the Irish, Nick Civetta and John Quill earn rests in the build-up to the June 24 and July 1 Qualifiers as Mitchell looks to give every player in the 30-man squad playing time. Nate Brakeley partners Ben Landry in the Wisconsin-native’s first Eagles appearance since last year’s Americas Rugby Championship. Chris Baumann also returns to the front row from last weekend’s starting XV, with James Hilterbrand coming in to hook between the Austin Black and Tony Purpura.

Clever’s last test for the Eagles – a try-scoring effort against Chile in February – was cut short due to an injury as the team went on to win the ARC. He will extend his record caps number to 74 Saturday wearing No. 6 alongside loose forwards Cam Dolan, No. 8, and Tony Lamborn. Since Mitchell took charge ahead of the 2016 campaign, the three have combined for 12 tries.

Vice captain Nate Augspurger moved from scrum half to the wing when Shaun Davies entered the Ireland match as a substitute, and resumes the role out wide opposite fellow Men’s Eagles Sevens representative Matai Leuta. Davies and Will Magie make up the half-back duo, while Mitchell has opted to keep the threat of AJ MacGinty in the centers, where he played against Uruguay in the ARC. Indiana University graduate Bryce Campbell will provide the hard running at outside center in front of full back Mike Te’o.

Marcel Brache, Ben Cima, Peter Malcolm, Ryan Matyas, and Ben Tarr follow up starting-XV selections against the Irish with reserve nods for the Georgian matchup, while Dino Waldren could see his first action of the tour as a substitute.

Lessons learned against Ireland will serve the Eagles well leading into the Qualifiers, but Georgia will offer a unique challenge, as well, bringing a game plan built on strength and supremacy in the set pieces to the state of Georgia. The teams have not met since the fall of 2013, when the Eagles earned their third defeat of the Lelos in four games.

“Georgia bring a different set of unique strengths than Ireland and we will experience humid conditions that will create its own challenges that we will have to manage smartly,” Mitchell said. “The team, players, and staff have worked very hard again in our second test week preparation and I am noticing a greater team cohesion, and role clarity is improving.”

Saturday’s match at Fifth Third Bank Stadium at Kennesaw State University will kick off at 7 p.m. ET. Tickets are still available from $20, while those not able to attend can watch the final match of the Emirates Airline Summer Series live on The Rugby Channel.