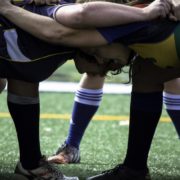 MARIETTA, Ga. – Atlanta Harlequins have set themselves up for an improved Women’s Premier League finish in 2016 following a 26-14 defeat of Berkeley All Blues at the Championship event at Life University Rugby Complex.

Both the Championship host and Oregon Rugby Sports Union (ORSU) could better their 2015 finishes in Sunday’s Fifth-Place Final, scheduled for an 11 a.m. ET kickoff on The Rugby Channel. Friday’s losing teams – Berkeley and DC Furies – will meet for a best-possible seventh-place finish Sunday at 9 a.m. ET.

Buoyed by their local fan base, the Harlequins kicked off the WPL Championships with the first score of the weekend. Initially losing its own lineout in an advantageous position in the All Blues’ half, Atlanta blocked Berkeley’s clearance kick for prop Maggie Craig to dot down for the try.

The blocked kick to set up the opening try was not the last Berkeley would concede in the match, happening again in the 17th minute. The second block led to Atlanta scoring in the corner, though the match official did not award the five-point score. The Harlequins kept up the pressure in the offensive end, keeping Berkeley from escaping its half. Gardenia Schaaf’s strong run in the 26th minute was undone by a forward pass, and No. 8 Kimberly Knipe took the ball from the ensuing scrum to the posts for a 14-0 lead.

The All Blues began to find their rhythm towards the end of the first half. Fly half Lauren Rhode barely reached the line in the 30th minute and converted her own try to cut the deficit in half at 14-7. A breakout counterattack five minutes from the half was nearly finished by win Ardia Kelker only for Atlanta to take her into touch. The All Blues returned the favor on a similar breakout by the Harlequins to bring an end to the first frame.

World Rugby Hall of Famer and Women’s Rugby World Cup Champion Patty Jervey put the Harlequins back on the front foot to start the second half, setting up flanker Elizabeth Snodgrass for the 41st-minute try. With the lead back to two scores at 19-7, Atlanta breathed a little too easy in the following minutes, conceding several defensive penalties in its own half. The free meters and attacking strength of Berkeley resulted in a try for lock Allison Byrne.

Rhode converted the 49th-minute try for a 19-14 score line, but her kick behind the All Blues’ 22 in the 65th minute was blocked by Jervey. The former Eagle chased the ball and managed to get a toe on it to put it beyond the try line, but she was taken out of the play ahead of the try-scoring opportunity for a penalty try to Atlanta.

The Harlequins held on to their 26-14 lead to see out the victory and book a place in Sunday’s Fifth-Place Final.

DC Furies were dead last in the competition last season, dropping both of their Championship matches at Infinity Park in Glendale, Colo. The tough ask of going up against Oregon Rugby Sports Union was too much for the east coast outfit in a 37-5 dismantling in Georgia.

ORSU capitalized on a Furies turnover in the opening stages of the semifinal, with center Zoe Wilson catching the defense on the wrong foot and fending her way towards the try line. Stopped short, Wilson laid the ball off in the breakdown for Rachel Johnson to take into the try zone.

The early, 7-0, lead came in handy when an ORSU player was shown a yellow card for a dangerous tackle in the 14th minute, but Johnson was able to extend the lead to 12-0 a minute later, anyway, with a solo run down the wing. Before the yellow-carded player could exit the sin bin, lock Candace Mahoney-Watwon finished off an ORSU attack for a 19-0 score line.

At full strength for just a few minutes, ORSU had another player sent to the sin bin with a yellow card in the 28th minute. Fourteen players or 15, ORSU continued to work with ball in hand, and full back Jackie Lewis finished off the first-half scoring for a 24-0 lead.

The Furies broke the scoreless streak at 47 minutes when a maul pushed over the line for their only try of the match, but ORSU piled on three additional tries in the final frame for the 37-5 victory.

Atlanta will play ORSU for fifth place Sunday at 9 a.m. ET, with the seventh-place seeding match between Berkeley and DC scheduled to kick off immediately following at 11 a.m. ET. All four matches on the final day of the Women’s Premier League Championship will be broadcast on The Rugby Channel.