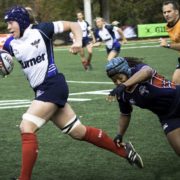 The San Diego Surfers were disappointed to be on the outside looking in last year, finishing fifth at the playoff event in Glendale, Colo. They will meet the Raptors in Sunday’s Final at 3 p.m. ET, while New York and Twin Cities Amazons will duke it out for third place at 1 p.m. ET. All four matches – including the Fifth- and Seventh-Place Finals – will be broadcast live on The Rugby Channel.

Glendale managed to string wins together through the first half of the season without the likes of Kristen Shalosky and capped Eagle Hannah Stolba, and found the composure to come into the Championship Semifinal with just one late-season loss. Against New York, the only WPL club unbeaten through six league matches, the Raptors found their stride.

Stolba punished New York’s ill-disciplined defense in the third minute with a penalty goal and the Raptors stole possession as their opponent looked to score on the following possession. In the ninth minute, 2015 Final Most Valuable Player Joanna Kitlinski took a neat inside ball in her own half past midfield for Denali Graham to finish with the try.

New York cut the Glendale lead to 10-3 with an Ayden Bain penalty goal in the 16th minute and cut short a Raptors attack in the 19th minute, but Stolba was able to add an extra three points with a penalty goal 10 minutes prior to the halftime whistle. Wing Colleen Cribbs extended the reigning champion’s lead with a try down the wing before Emily Magee’s solo run through several defenders allowed Evelyn Ashenbrucker to bring the score to 18-8 at the break.

The team from the east coast pushed back to start the second half, but all it took was one turnover to tick Glendale’s side of the scoreboard. Kitlinski went on a winding run and Rio 2016 Olympian Carmen Farmer offloaded to scrum half Jenny Lui in contact for a 23-8 score line.

Eagle Kate Daley assumed throw-in duties at the lineout and combined with international teammate Alycia Washington in the 46th-minute set piece only for the ball to be lost forward a phase later. The self-inflicted errors continued throughout the second half as Farmer and Andrea Prusinski went over for Glendale, though substitute Kristen Siano scored a consolation try ahead of the full-time whistle for the 37-13 final score.

The Surfers benefitted from the additions of full-time Eagle residents Jordan Gray, Molly Kinsella, Samantha Pankey, and Hope Rogers throughout the season to compile a 5-1 record, beating previously-unbeaten Glendale in the final weekend. Friday, however, San Diego proved each player in the first XV and match-day 23 is ready for a Championship bout.

Twin Cities opened the scoring in the second semifinal with a Jacie Vonada penalty goal five minutes into the game, the final lead the ‘Zons would take in the match. The Surfers’ attack a few minutes later went forward in each phase, and Women’s Eagles Sevens’ Dana Meschisi kept the attack moving with a cut inside before No. 8 Kara Matthews found the try line.

Up, 7-3, the Surfers kept Amazons wing Kaelene Lundstrum in check to hold on to the lead. Meschisi redeemed herself with a turnover after having turned the ball over mere seconds earlier, and Gray and Rogers swung the ball in the back line to Tia Blythe for the team’s second try and 12-3 lead.

Eagle Stacey Bridges was a menace off of the back of the scrum but dealt with a few bumps and bruises throughout the match. She was one of the bright spots of the Amazons’ first half, which yielded just the fifth-minute penalty goal.

Sustained pressure from Twin Cities to end the half translated into momentum at the start of the second frame, with Lundstrum instrumental in any try-worthy attack. The Amazons drew two successive penalties in the middle of the field at the San Diego 22 before they decided to go for the points. Vonada missed the 46th-minute kick, however, which spurred the Surfers into life.

Rogers burst through the gain line in the 55th minute and was able to find her feet after an initial tackler did not hold her to the ground, finally succumbing to a tackle a meter or two from the try line. Gray was one of several teammates supporting the prop, and found the space between three defenders to score the team’s third try.

The Surfers added three tries to the 19-3 lead to head into the final minutes with a 36-3 advantage, and conceded just one consolation try for a 36-8 victory.

Glendale and San Diego have already met each other twice this season coming out of the Blue Conference, with the teams winning their respective home matchups. If there is an advantage to be had, the Surfers carry it due to the defeat of the Raptors in the final weekend, but Sunday will be a unique encounter on neutral ground.

A year ago, the Raptors hosted the WPL Championship event at Infinity Park in Glendale, Colo. Though they do not have the benefit of home-field advantage in Marietta, they could replicate their 2014 win, which came on the campus of Life University.

Sunday’s action kicks off from Life University Rugby Complex at 9 a.m. ET with the seeding finals featuring the fifth- through eighth-place teams. The Third-Place Final, scheduled for 1 p.m. ET, is a rematch from last year’s bronze-medal game at Infinity Park as New York takes on Twin Cities. All of Sunday’s matches, including the Championship Final at 3 p.m. ET, will be broadcast live on The Rugby Channel.