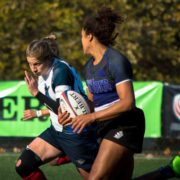 Brigham Young University graduate and capped Eagle Jordan Gray was recognized as Most Valuable Player for her play at inside center through the weekend, scoring one try in Friday’s semifinal defeat of Twin Cities Amazons and influencing Sunday’s Final in favor of San Diego.

The Surfers had scored more points in six regular season matches than any team in the competition and came out of the gates Sunday intent on scoring as many points as possible. Their first attack covered nearly the entire field of play before Glendale forced a turnover, only for San Diego to get it back through a penalty. Prop Hope Rogers went through several defenders from the quick tap before the capped sevens duo of Hunter Griendling and Kate Zackary found fellow Women’s Eagles Sevens player Dana Meschisi for the opening try three minutes into the match.

Raptors fly half Hannah Stolba’s failed grubber kick near the Surfers’ 22 could have turned into a San Diego try a few minutes later if Glendale had not forced a turnover via a penalty at its own 22-meter line. Meschisi was close to doubling the lead and her scoring tally when Gray freed space for the No. 13 and wing Hannah Lockwood, but the chance was lost forward in-goal.

Gray fended a single tackler at the San Diego 10 and ran past the defense into the attacking third of the field before two Raptors converged to bring down the center. The MVP found Lockwood in space before she was taken to the ground for the wing to extend the lead to 12-0 after 13 minutes.

The Raptors pulled one back through Carmen Farmer when the Rio 2016 Olympian ran over two defenders on the try line, but Samantha Pankey nullified the score with her own try from an Elisabeth Henry offload in front of the posts. Stolba’s penalty goal two minutes from halftime hit an upright and bounced behind the bar for a 19-8 score at the break.

Try-scorer Meschisi was shown a yellow card in the 55th minute after San Diego had conceded consecutive defensive penalties. It took the full 10 minutes of the sinning, but Glendale turned the advantage into points after continuous offensive pressure within the 22. Hooker Jenna Beard finished the attack in-goal to cut the San Diego lead to 19-16.

The Surfers were going forward with their attacks while defending a slim margin with big runs from the likes of Gray, Rogers, and replacement substitutes such as Jamila Reinhardt. In the latter stages, an apparent kick to touch found the hands of a Surfer to start an attack with the Raptors somewhat out of position. Molly Kinsella found a gap to run for the corner and Reinhardt held off a few defenders to inch towards the line before Zackary dove over for the try and 26-16 Championship-winning victory.

New York Rugby Club could not overcome Twin Cities Amazons in the 2015 Third-Place Final, and, following a disappointing end to a Championship run in Friday’s semifinal, had the opportunity and squad ready for a rematch.

Twin Cities were not interested in a shot at goal in the opening stages of Sunday’s match, instead playing quickly to catch New York retreating. The initial pressure came to nothing, but New York allowed the Amazons to score in the 17th minute from a scrum. Full back Jacie Vonada had Kaelene Lundstrum as a passing option as she ran towards the touch line and used her wing to round the final two defenders for the opening try.

New York’s best chance to score in the first half came in the 24th minute when Mary McCarthy changed the direction of the attack for a lengthy run into the opposition half before a slick offload to Cynthia Wright. The flanker, with a defender tugging at her jersey from behind, found Ayden Bain for a run to the posts, but the ball was lost forward in the next phase.

The Amazons were gifted possession when New York was penalized in the scrum in front of the Twin Cities posts, but could not escape their 22 before losing it forward. Phaidra Knight brought her side close to the line from the set-piece win and Kate Daley kept the attack moving to Bain for the dummy pass and try.

The teams exchanged scoring opportunities in the dying minutes of the half, with the Amazons reclaiming the lead through a defensive set piece. Lundstrum, taller than most forwards in either team’s pack, found herself in New York’s lineout five meters from its own try line. The wing went up for the throw and stole it before coming down and beating everyone to the corner for a 10-7 lead at halftime.

Ashley Nesby put New York in an attacking position seven minutes into the second frame with a long run to the Amazons’ 22, and finished off the attack with a try when Tiffany Faaee offloaded to her in contact. With the 12-10 lead, New York began to exert some dominance in the match, and Phaidra Knight made it count on the scoreboard in the 68th minute from a lineout-turned-maul.

The Amazons lost their influential full back to injury 10 minutes from time, and saw New York cross the try line twice more to bring the final score to 29-10.