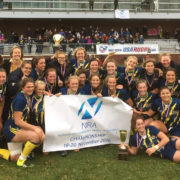 The NIRA consists of 16 NCAA-sponsored schools with varsity rugby programs across three divisions, with Central Washington one of the newest members for the 2016 season. As collegiate programs around the country improve on the field as well as off of it, earning more and more support from their respective institutions, NIRA is dedicated to assisting said programs transition to NCAA status.

The Wildcats won the 2015 USA Rugby Women’s Division I Spring Championship before losing to the perennial Pennsylvania State University team in that year’s National Championship bout, and reached the 2016 NIRA Final Four by winning all four of its NIRA matchups in the regular season.

Quinnipiac came into the Final Four weekend on the campus of the United States Military Academy with a sole blemish on its record – a loss to Central Washington. For a team that does not lose often, it was motivation to ensure it did not happen again.

AIG Women’s Collegiate All-American Ilona Maher scored two tries in the Bobcats’ 65-8 victory over Army Friday, Nov. 18, while fellow All-American and capped Women’s Eagles Asinate Serevi scored a brace of her own in the Wildcats’ 62-19 defeat of American International College to set up the rematch in the Final.

Though Central Washington struck early, Quinnipiac was up for the challenge of defending its NIRA Championship title, taking a late first-half lead before conceding even later for a 17-17 tie at the break. From Quinnipiac University Athletics:

Determined to repeat their national championship and top Central Washington, Quinnipiac came out for the second half ready to go. Bobcats took the lead within the first three minutes of the second half when Poole broke away and passed it off to Maher for the try. Conversion by Gegeckas was good and QU brought the score to 24-17. Central Washington didn’t let up, however, and they scored their first try of the half off a scrum at the 5-yard line tying the score back up at 24-24.

Quinnipiac fought hard into the second half and as Central Washington grew tired the Bobcats piled on the points. A QU scrum inside the CWU 40-yard line was won by the Bobcats and brought up the field by Maggie Myles who dished it off to Poole for the try. Quinnipiac up by 5 decided to take the kick for points after a penalty and it was good, bringing to Bobcat lead to 32-24.

Quinnipiac added two more tries in keeping Central Washington from the try line in the final quarter of the Final, and honored its opponent with a well-earned, full-time celebration and recognition tunnel.

USA Rugby provided match officials and field equipment for the 2016 NIRA National Championship event in New York, as well as match balls and tees for teams’ use in-game.