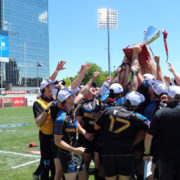 Forty teams across five divisions of senior club rugby will be competing for National Championship berths when knockout rugby returns to Tucson, Ariz., and Pittsburgh May 20-21. The divisions will see two quarterfinal matchups and a semifinal matchup played at each location prior to the weekend winners advancing to the National Championship event in Glendale June 3-4.

“USA Rugby is thrilled to return to these playoff locations, each of which will treat participants and spectators alike to a memorable championship environment,” USA Rugby National Championship Series & Competitions Manager James Wilber said. “These venues have the full support of their local rugby communities and will continue to showcase the pinnacle of domestic rugby competition.”

With 12 acres of rugby-ready surface, Founders Field has become a home of USA Rugby National Championship Series events throughout the past two decades. A first-class clubhouse for players and fans, well-groomed fields maintained throughout the year, and physical amenities not found at city parks are just a few of the highlights of the Pittsburgh venue. A quality scoreboard and bleachers make for a supporter-friendly atmosphere to complement the playoff rugby set to be on display.

Known across the country as “RugbyTown USA,” Glendale’s Infinity Park has been home to USA Eagles test matches and international rugby sevens invitationals in addition to its Championship-hosting duties. The venue – in an enclave of Denver – hosts USA Rugby NCS events most years with more than 4,000 spectators able to attend any given event because of Infinity Park’s permanent seating arrangement. Also possessing one of the most pristine fields as well as a turf field, the home of Glendale Raptors has set a standard for rugby clubs across the country since its opening in 2007.

“The Club National Championships are USA Rugby’s longest-running community event, and we’re honored to have such amazing venues for our clubs to participate in playoff rugby,” USA Rugby Club Manager Erik Geib said. “A 2015 survey showed that 85 percent of our senior clubs consider playing for a national championship to be important to their club, and we take constituent services very seriously.”

More information related to matchups for the 2017 USA Rugby Emirates Airline Club National Playoffs will be released in due course. Supporters are encouraged to follow club results on the Club Competitions page of the USA Rugby website.