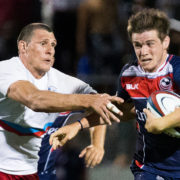 Blaine Scully will captain the U.S. in its first match since the November Tour while vice captain Todd Clever will make his nation-leading 70th appearance in the back row. The Feb. 4 match is scheduled to be broadcast live on The Rugby Channel from 3 p.m. CT.

“The guys have connected well,” said Mitchell, whose assembly began at the Chula Vista Elite Athlete Training Center last week prior to Wednesday travel to Texas. “The metrics are up and so far, in the small amount of time we’ve been together, there seems to be clarity.

“We always aim to be the best-disciplined team on the weekend. There are a couple of new things in defense with a primary objective, and the attack has been simplified. The players seem to be enjoying moving the ball.”

Wheeling Jesuit University’s Peter Malcolm has been an AIG Men’s Collegiate All-American since 2014 and was included in several Men’s Eagles Sevens camps in recent years. This year’s ARC marks the first Eagles assembly of which he has been a part. The 23-year-old hooker will scrummage between professional Chris Baumann and returning Eagle Tony Purpura, who last wore the U.S. jersey in 2010.

Nick Civetta earned his first international cap with the Eagles against Romania last year, partnering Nate Brakeley in the second row. Mitchell has again paired the two for the opening match of the 2017 calendar year. John Quill, a day-camper for the Eagles during the Summer Series, will wear the No. 6 jersey in his first test since Rugby World Cup 2015. Clever and Al McFarland, another World Cup veteran, round out the back row.

“We’re getting closer to what our squad of 30 will be for June’s Rugby World Cup Qualifiers, but there are positions up for grabs,” Mitchell said. “The biggest area for development – and it doesn’t happen overnight – is the development of a second and third scrum. We have nice group of young guys now but it’s going to take time.”

The U.S. left its mark in Texas in the inaugural ARC competition as the Eagles and AIG Men’s Junior All-Americans both defeated Canadian opposition in the same night. The young crew of under-20s deserved recognition as a whole, but it was the final-play penalty kick from midfield by fly half Ben Cima that propelled the MJAAs to a World Rugby U20 Trophy appearance. The 20-year-old did not receive playing time with the Eagles around “The Rugby Weekend Presented by AIG” in Chicago, but will make his test debut at No. 10 behind scrum half Nate Augspurger Saturday.

The long-awaited return of AJ MacGinty has been seven months in the making, with the Sale Shark overcoming injury and life in a new professional environment to find his form. A starting fly half in his 10 caps with the Eagles, MacGinty will serve as a play-making center in Mitchell’s squad this weekend. His skills on the ball and in the defensive aspects of the game will complement the hard-running style of Indiana University’s Bryce Campbell, who only debuted for the U.S. three months ago, before he heads back to England.

“If you have a 12 that can be direct with the ball, defend well, and distribute, you become a greater threat with an added variety to your attacking game,” Mitchell said. “As AJ’s only here for a week, he’s been awesome in the sense of taking on the challenge of playing 12 to help the likes of Ben and Will Magie. His presence alone is good for those young guys.”

Team USA Olympian Zack Test has foregone training with the sevens program at the onset of the 2016-17 HSBC World Rugby Sevens Series to focus his attention on XVs. His debut in 2015 and subsequent selection to that year’s World Cup – he started in two pool matches in England – preceded his Rio 2016 Olympic Summer Games campaign. Test will line up on the wing Saturday for the Eagles opposite former sevens standout Scully, with all-around utility Mike Te’o reclaiming the full back position.

All-Americans Will Magie and Alex Maughan are also in line for debuts from the reserves, with the latter selected to the November Tour prior to leaving camp due to injury. Brigham Young University’s Matt Jensen, initially selected for the South American portion of the U.S.’s ARC campaign, will provide second-row cover in place of the injured Siaosi Mahoni.

Uruguay has won just two of its 15 meetings with the Eagles since 1989, the most recent victory a home win last March. In 10 tests since, Los Teros have outscored opponents 230-220 despite winning on only four occasions.

“It’ll be a tight contest because both sides enjoy moving the ball,” Mitchell said. “They’re a team that flat-out plays at 110 miles per hour. I still think it’ll come down to who’s most disciplined and who is the best – defensively – on the evening.”

The first international test rugby match in San Antonio will kick off from Toyota Field Saturday, Feb. 4, at 3 p.m. CT. The live broadcast will be available to subscribers of The Rugby Channel, while USA Rugby’s Twitter account (@USARugby) will provide live match updates.