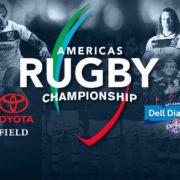 The Eagles will enjoy the sunshine of Texas in San Antonio, where Uruguay – the U.S.’s third-most-played opponent in international rugby history – will line up opposite John Mitchell’s team. Los Teros have only beaten the Eagles twice in 15 meetings, the most recent in Montevideo last year.

Dell Diamond was successfully converted from its baseball setting to that of a professional rugby match when the U.S. beat border rival Canada in Austin, with the on-field atmosphere matching that of the more-than-7,000-supporter crowd under the lights. The similarly-scheduled evening kickoff will see temperatures cool for the Eagles against 36th-ranked Brazil in the teams’ second-ever matchup.

Both matches – as well as the remaining Eagles games of the Americas Rugby Championship – will be broadcast live to subscribers of The Rugby Channel. Tickets are also still available for the matches in Texas starting at less than $20 for each. For more information, visit the USA Rugby Ticketing page.