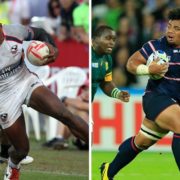 The Selects trained in West Palm Beach, Fla., early in the week prior to their departure for South America, avoiding Hurricane Matthew in the process. The short camp north of the equator allowed the 26 athletes and the coaching staff to gain a cohesive understanding of the game plan, as the team hails from more than a dozen clubs and collegiate institutions. Taufete’e, at hooker, will lead the team in Saturday’s 1:15 p.m. ET kickoff from Estadio Charrúa, available for viewing in the United States with a subscription to The Rugby Channel.

“The players and staff have been working tirelessly in bringing our very young squad up to speed with the senior systems and playing framework,” Egan said. “Although we have a very young, inexperienced squad, we are confident that they can be successful against Fiji.

“We will undoubtedly be the underdogs in this game as Fiji will have had their players in their system longer, but we have faith in the ability of our young players to step up at this level. We are excited to see how our players perform at this level of international rugby and we are hoping to progressively build on each game throughout the tour.”

Taufete’e is one of seven players in the starting XV that have been capped at the senior level, including front-row partner Demecus Beach and the flanker pairing of Pat Blair and Harry Higgins. The senior experience also melds into the back line, with JP Eloff and Stephen Tomasin starting the attack from the fly half and scrum half positions, respectively, and Brett Thompson and Mike Te’o on the wing and at full back.

Mason Pedersen completes an all-PRO Rugby front row and brings continuity with San Diego Breakers teammate Taufete’e, while San Francisco Rush’s Siaosi Mahoni will start alongside Brigham Young University’s Matthew Jensen in the second row. Breakers No. 8 Sione Tu’ihalamaka will wear the same jersey at the back of the scrum for the Selects Saturday.

With the Rio 2016 Olympic Summer Games completed and a Rugby World Cup 2019 qualifying campaign on the horizon, several Men’s Eagles Sevens pool players have been made available for XVs selections. Blair is the only forward in the starting XV with Eagles Sevens experience, while several backs boast HSBC World Rugby Sevens Series appearances.

Matai Leuta will patrol the wing opposite Thompson, while Martin Iosefo will partner Indiana University’s Bryce Campbell in the centers. The open-play prowess of the sevens players, a group that includes Te’o and Tomasin, will challenge the Warriors offensively as well as on the defensive side of the ball.

Mahoni, 19, is the youngest player in the starting XV, though Lindenwood University reserves Malon Al-Jiboori and Chance Wenglewski have yet to reach their 20th birthdays. Hanco Germishuys is also included on the bench as a front row substitute, and Life University’s Alex Maughan could also offer fresh legs in the scrum.

Christian Ostberg is the only player to have come into camp from overseas, playing professionally as a lock in France. The reserves, much like the starting XV, represent multiple levels of the domestic game, with University of California, Berkeley, graduate Nick Boyer, longtime All-American and current Rocky Gorge Rugby Football Club member Ben Cima, and Ohio Aviators’ Ahmad Harajly available for Egan’s squad Saturday afternoon.

The Selects have been drawn into a group with the ‘A’ sides of Argentina and Samoa, and will play Fiji, Canada, and Uruguay in Montevideo over the course of the next nine days, at the culmination of which a winner will be determined based on total competition points. The Americas Pacific Challenge presents an opportunity for domestic talent to gain international match time while also preparing players for potential call-ups to the senior squads during the November international window.

Kickoff for Saturday’s match between the USA Rugby Selects and Fiji Warriors, the second of three matches scheduled for Estadio Charrúa that day, is set to kick off at 1:15 p.m. ET. The live broadcast will be available to subscribers of The Rugby Channel, with live match updates to be posted by USA Rugby’s Twitter account (@USARugby).