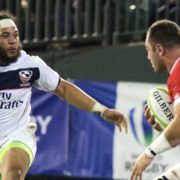 MONTEVIDEO, Uruguay – Mike Te’o will captain the USA Rugby Selects against Canada ‘A’ Wednesday in the second round of the Americas Pacific Challenge at Estadio Charrúa.

Ray Egan’s development side opened the first-year competition with a loss to Fiji Warriors Saturday, while Canada scored four tries in a bonus-point loss to Argentina XV. The border rivals sit at the bottom of their respective pools heading into tomorrow’s match, which kicks off at 1:15 p.m. ET. The live broadcast will be available to subscribers of The Rugby Channel.

“I think Canada had a tough game but Argentina are very good, so Canada did well against a much more powerful team,” the head coach said. “I think Argentina are the team to beat on this tour and will be very strong favorites. With that in mind we can only work on our game as we are looking to reinforce our game plan at our second time out.

“We, again, will be underdogs for this game as Canada have a more experienced squad at this level, but our boys are up for the challenge.”

Te’o’s open-field running ability and confidence under pressure showed against Fiji, and his combination play with the backs cut the defense open on one or two occasions. It was his grubber kick in the fifth minute of the match that set both of his wings away into the try zone for the opening score, though only Matai Leuta, the try-scorer, returns to the starting XV for Wednesday. Ahmad Harajly replaces Brett Thompson in the No. 14 jersey, with Thompson available in the reserves.

The half-back duo of JP Eloff and Stephen Tomasin will also start the match against Canada on the bench as Nicklas Boyer and Ben Cima take over scrum half and fly half duties, respectively. Apart from Te’o, who wore No. 9 for the Men’s Eagles in their match against Canada’s test side in this year’s Americas Rugby Championship, and loose forward Malon Al-Jiboori, Cima is the only Select in the starting XV to have played against a full Canadian XVs side in 2016, kicking the game-winning penalty in the final minute of the AIG Men’s Junior All-Americans‘ World Rugby U20 Trophy Qualifier victory. He and Boyer will get the ball to the powerful, returning midfield of Bryce Campbell and Martin Iosefo, who switch jersey numbers from Saturday.

“We are looking forward to Nick and Ben getting the start and seeing how they progress through the game,” Egan said. “It’s a big step for all of the half backs but there is nothing like gaining experience at this level and adjusting to the pace of the game. JP and Stephen did well in a tough game against Fiji, it being Stephen’s first 15s game in a long while and JP’s first game since returning from injury during the PRO season.”

Sione Tu’ihalamaka will anchor the scrum once again, one of three forwards making a second consecutive start in the developmental competition. Demecus Beach will look to have a more disciplined performance Wednesday following Saturday’s yellow card, and will bring along Hanco Germishuys, who is starting at hooker for the first time in his budding international career. Jake Turnbull did not make the 23-man roster for the Fiji loss, but could make his debut with a U.S. team after a title-winning season with PRO Rugby‘s Denver Stampede.

Christian Ostberg, at six-foot-six, moves into the second row after being used as a substitute over the weekend, partnering Harry Higgins, a loose forward against Fiji. All-American Al-Jiboori will work with San Diego Breakers professional Cecil Garber in the loose.

“This is a development tour so with that being the focus it was important to get guys game time at this level,” Egan said. “With the quick turnaround of four days we also need to be mindful loads, also. With these in mind it allows new players to put their hand up and take their opportunity to impress.”

Each of Wednesday’s available reserves took part in the first round of the Americas Pacific Challenge. Chance Wenglewski replaced Mason Pedersen after 26 minutes when the latter sustained an injury. Saturday captain Joe Taufete’e, the only Select with an Eagles cap at a Rugby World Cup, can also be called upon from the bench. Angus MacLellan has been called into the squad for the injured Pedersen, but is not included in the match-day squad.

Egan’s troops are currently on zero points in Pool A, with Argentina and Samoa each earning Saturday victories to garner five points. Fiji leads the competition with five points and a superior point differential, while Uruguay’s two-bonus-point loss puts them ahead of Canada in Pool B. The winner of the Americas Pacific Challenge will be decided based on the competition points following the third round, which is scheduled for Sunday, Oct. 16. Wednesday’s match between the Selects and Canada ‘A’ will be broadcast live on The Rugby Channel from 1:15 p.m. ET.