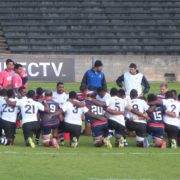 Joe Taufete’e captained the team from the hooker position, and led that particular starting XV – as well the 26-player-strong Selects squad that traveled from Florida to Uruguay – in senior international caps with seven, more than a fifth of the squad’s total. Match full back Mike Te’o and wing Brett Thompson each have six international appearances and fly half JP Eloff played in four tests during the first Americas Rugby Championship, otherwise the capped players in Selects Head Coach Ray Egan’s squad have only played in one or two international tests.

Against a Fiji team that featured as many as nine capped internationals, the youthful Selects began the match with intent and composure, withstanding an initial Fijian attack before storming down the field themselves. The U.S. team would take a fifth-minute lead via a trio of backs that boast HSBC World Rugby Sevens Series experience, with Te’o, at the attacking 22, kicking a grubber through for wingers Matai Leuta and Thompson to chase. The hop from the ball near the try line caused it to elude Thompson as well as two Fijian defenders, but Leuta grabbed it for the 5-0 lead.

“We started okay and we thought that, when Matai scored his try from Te’o’s grubber, that it might settle our lads to kick on,” Egan said following the match.

Despite the Warriors extinguishing the lead within two minutes of Leuta’s try, the Selects endangered Fiji’s defensive third of the field on several occasions in the first half. As the halftime score line of 24-5 indicates, however, they were not able to penetrate the in-goal area, nor were they able to turn their attacks into points via the boot of Eloff.

Penalties, turnovers, and defensive errors also piled onto the Selects’ misfortunes, leading to center Martin Iosefo‘s sinning in the 36th minute and prop Demecus Beach‘s in the 44th minute. Birthday boy Harry Higgins held the try line on the ensuing attack, getting an arm under Fiji’s Mesake Doge as he dove for the five-pointer, but referee Pable de Luca saw enough of the ball on the grass to award the final try of the half.

Fresh, young legs took to the field throughout the second half for the Selects, too, and tested Fiji’s conditioning, but could not stem the flow of the Fijian way of rugby.

“We started to struggle when we failed to put Fiji under pressure behind their 22-meter line; we let them out far too easily,” Egan said. “Our exits and counter attacks failed to release pressure, and this added to missed tackles, allowing Fiji to stay on their feet and get their offload game going.

“Fiji brought big physicality and line speed, which put us under pressure and forced bad decisions. From this we will learn a lot. This is the experience our young players need so that they can adapt and overcome bigger teams. We got some things right and when we did we looked threatening, but, essentially, our phase execution let us down.”

Higgins, born Oct. 8, celebrated his 25th birthday Saturday amongst a team with an average age of 23. Though he and the nine additional Eagles in the Selects squad are leading the group in terms of experience, all 26 players under Egan’s command will watch Saturday’s film resolved to finding and fixing the errors that allowed Fiji to score 10 tries in 80 minutes.

Egan, head coach of the San Diego Breakers in the inaugural PRO Rugby season in 2016, said positive takeaways the coaching staff had from the match included the set pieces, with the scrum holding steady throughout the first half despite the early loss of prop Mason Pedersen to injury. Additionally, the young combination of centers in Indiana University’s Bryce Campbell and Iosefo and the back three that combined for the first try of the game threatened Fiji on offense and defense.

“We will take this on the chin and work hard before we take on Canada,” Egan said. “If we can learn from some of our mistakes and tighten up our decision making and defense we will perform better next time out.”

Apart from the motivation that high-level performances could earn players a call-up to the Eagles during their three-match November Tour, the Selects will not need any outside stimuli to get ready for their next Americas Pacific Challenge match. Border rival Canada’s developmental side also lost its matchup Saturday, a similarly-high-scoring, 56-29, game against Argentina XV, but was able to cross the try line four times to earn a competition bonus point.

The tournament’s final standings consolidating the two pools of three nations each will be decided following the third round of matches. As it stands, the Selects are in sixth out of six with zero competition points, with fellow round-one losers Canada and Uruguay only slightly ahead of the U.S. with one and two points, respectively.

The Selects have set goals to improve in every match of the competition, beginning with Wednesday’s matchup with Canada ‘A’ at Estadio Charrúa. Kickoff for the Oct. 12 match is scheduled for 1:15 p.m. ET with a live broadcast available to subscribers of The Rugby Channel.