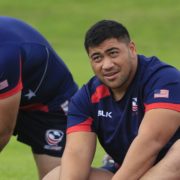 LAFAYETTE, Colo. – Newcastle Falcons’ Nick Civetta and Saracens Football Club’s Titi Lamositele are being made available by Premiership Rugby to tour with the USA Men’s Eagles in November, including the match against the New Zealand Maori All Blacks at Chicago’s Toyota Park.

The Friday, Nov. 4, match falls just outside of the international test window and Global Release Period that calls for professional clubs around the world to release players called up to international duty as subject to World Rugby’s Regulation 9.

As stated in Regulation 9 of the World Rugby Handbook:

Players representing the U.S. in overseas competition aspire to play rugby at the highest level, be it in England, France, New Zealand, or with the Eagles on the international stage. Premiership Rugby’s release will allow Civetta, yet to be capped by the national team having played professionally since 2013, and Lamositele, 21, to test themselves against international competition.

The Eagles have three matches scheduled during the November window, after which the grand total of test rugby matches for John Mitchell’s squad in 2016 will come to eight. Mitchell, in his first year as head coach, and his staff will benefit greatly from Premiership Rugby’s graciousness in releasing players from club duty as the Eagles look to build continuity throughout the ranks early in this Rugby World Cup cycle.

“Whether it’s international, professional, or club rugby, every program’s after continuity and consistency in its player pool,” Mitchell said. “Our current and potential Eagles are spread far and wide and come from a variety of unique angles and circumstances to play for the USA, and getting them all in one place at one time can be challenging.

“It has been a pleasure to strike a relationship with Mark McCall, Dean Richards, and Premiership Rugby’s other directors of rugby, who understand and empathize with our situation in terms of player availability. USA Rugby, my staff, and I appreciate their flexibility in this regard, and we look forward to a continued partnership that benefits all parties.”

Recently announced, the Maori All Blacks squad for the match in Chicago is comprised of several capped All Blacks plying their trade in club competitions, all released for match duty. When they traveled to the United States for a match against the Eagles in 2013 – a sellout at Pennsylvania’s PPL Park – the U.S. opposition was without several experienced veterans due to the contest scheduled outside of the international window.

When the Rugby World Cup-winning All Blacks came to Chicago in 2014, leagues around Europe, including Premiership Rugby, obliged the U.S.’s request for its veteran and younger players alike to be released for the historic event.

The creation of the Americas Rugby Championship competition for February and March has provided the Eagles and Americas’ Tier Two nations with additional opportunities to assemble, but the end-of-year tests are important for experienced and developing players.