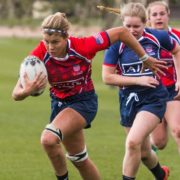 Updates to the invited list of athletes for the Girls High School All-Americans powered by Atavus Selection Camp for the Can-Am Series have been made. Those changes have been reflected in the squad list below.

LAFAYETTE, Colo. – In preparation for the upcoming Can-Am event in August, 36 players have been invited to the Girls High School All-American powered by Atavus Selection Camp, to be held June 27-30.

“We are very excited for the GHSAAs to compete in the upcoming Can-Am event,” GHSAA Program Manager Anna Kunkel said. “Playing against Canadian provincial teams for the last two years has allowed our players to significantly improve their decision making and skill development. However, at this point in the development of the GHSAA program, it is important for our top 15s players to take the next step and compete at an international event.”

The Selection Camp will be held at Grande Sports Complex in Casa Grande, Ariz., and will serve as the primary selection vehicle for the Can-Am Series July 29 to Aug. 6 in Ottawa, Ontario. The GHSAAs are scheduled to play against Canada Aug. 1 and 5, with the AIG Women’s Junior All-Americans also playing two matches against their under-20 Canadian counterparts.

Atavus has supported the GHSAAs to ensure equitable opportunities in rugby for young women. Atavus will continue to sponsor the team’s preparation and travel to play in elite tournaments across the U.S. and select international competitions. Four GHSAA alumnae – Kayla Canett, Lilly Durbin, Tess Feury, and Richelle Stephens – have gone on to earn senior caps for the Women’s Eagles (XVs) and Women’s Eagles Sevens teams since the program began, with more than a handful of others graduating to the WJAAs.

“This competition with Canada is an incredible opportunity for our young players,” GHSAA Head Coach Farrah Douglas said. “Each of the matches will be competitive and be a really good preview of the potential of our age-grade programs. With the success of athletes like Kayla Cannett and Lilly Durbin, the GHSAA staff hopes to continue to challenge our players to think critically, adapt, and be able to effectively make decisions and execute under pressure.

“Opportunities like the Can-Am series not only provide us with the a high-pressure environment to do so, but allows us to expose our age-grade players to the international environment at an earlier stage in their development, which can only continue to bring success for the USA within the women’s pathway.”