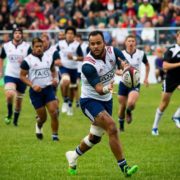 EDMONTON, Alberta – The AIG Men’s Junior All-Americans dug themselves a hole in their attempt to qualify for this summer’s World Rugby U20 Trophy, conceding seven tries to Canada’s under-20s in a 46-12 defeat at Ellerslie Rugby Park Tuesday.

Captain Malon Al-Jiboori and lock Daemon Torres scored first-half tries for Head Coach JD Stephenson’s side as the MJAAs ran into the halftime break trailing just 19-12. The 34-point deficit will need to be made up Saturday, June 17, in the second leg of the Qualifier if the All-Americans are to represent North America in Montevideo, Uruguay, in September. The second match is scheduled to kick off at 2 p.m. ET, and will be streamed live via Rugby Canada’s Facebook page.

Both teams endured shaky ball-handling in the first half, with the All-Americans pouncing on their first opportunity to score within 120 seconds of the whistle. With Al-Jiboori pointing to the corner of the field when Canada knocked the opening restart and played it cynically for a penalty, Torres followed a strong run by hooker Jack Iscaro to open the scoring, 5-0.

Knocking the ensuing restart, the MJAAs were undone minutes later in the forwards. First, a penalty in the scrum allowed Canada to kick for a five-meter lineout, from which the maul was brought down by the visitors for another penalty to Canada. The home side used its scrum to spread the defense, and lock Matt Beukeboom powered through a defender to level the match, 5-5.

Canada was awarded the ball from the eighth-minute restart for the All-Americans being offside. Lorenzo Thomas disrupted a pass as the opponent neared the 22, but it bounced into the hands of wing Anton Ngongo, who broke the deadlock, 12-5.

Full back Cristian Rodriguez was one of the most dangerous players on the field in the first 40 minutes, creating line breaks with flashy feet and finding support with accurate offloads. The U.S. sustained an attack inside Canada’s end from one such break that resulted in a high tackle, and Thomas found the try line minutes later from a successive infraction. Match official Chris Assmus conferred with one of his fellow officials, however, to signal the All-American had lost the ball forward in the attempted grounding.

Midway through the half, the All-Americans were forced to defend a well-recovered chip kick by Josh Thiel, but could not hold the inside center out of the in-goal area following a lineout win as Jake Thiel broke a tackle to make the try-scoring assist, 19-5.

The MJAAs had phases of sustained possession end via touch or knocks, but Al-Jiboori was able to finish off a 36th-minute attack with a juke at the attacking 22 and dot-down through a defender, 19-12. The All-Americans tried to even the score line before the halftime whistle with a late attack beyond the 40th minute, only to bring about the whistle with a knock.

An overlap along the 22 saw Canadian full back Aidan McMullan over the try line five minutes into the second half, 26-12, before the MJAAs scrambled to hit the ball loose out of Ndongo’s hands as he reached the try line a second time in the 51st minute. Thomas and Torres combined for a near-try-scoring run moments later, but Canada was able to clear and win a penalty for fly half Will Kelly to pad the lead with a penalty kick, 29-12.

The momentum the All-Americans found late in the first frame was captured by Canada as the match wore on, as scrum half Fraser Hurst extended the lead to 34-12 after Kelly and James O’Neill got within 10 meters of the try line. A missed penalty kick by Kelly provided only momentary respite, as the MJAAs found their breakout turned around to an intercept-try by Jamie McNaughton five minutes from time. A 90-meter try, finished by Cole Davis, from the ensuing restart brought the final score to 46-12.

The North American representative at the 2017 World Rugby U20 Trophy will be decided Saturday as the two teams meet again at Ellerslie Rugby Park. The MJAAs will need more than a win to qualify for the international tournament, with Canada now holding a 34-point advantage in the aggregate score line. The 2 p.m. ET kickoff will be streamed live on Rugby Canada’s Facebook page. Those interested in attending the match will be required to purchase a ticket to Saturday’s international test match between Canada and Romania.