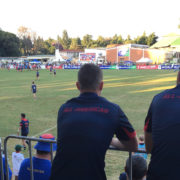 Head Coach JD Stephenson and staff will be working with a strong contingent of northern California talent amongst more than 30 attendees at the West Evaluation Camp Dec. 9-11 before the Central Evaluation Camp sees another 48 athletes train at Grande Sports Academy in Casa Grande, Ariz., Dec. 16-18. Fifty-nine athletes were seen at the East Camp at Life University last weekend.

Combined, half of the athletes attending one of the remaining camps was born in 1997 and will be eligible for under-20 selection throughout 2017. The other half was born in 1998 or 1999, the majority of which is still eligible for the Boys High School All-Americans. Twenty-one colleges are represented, as well, including 2016 USA Rugby Men’s Collegiate Division II National Championship runner-up Furman University and 2016 USA Rugby College 7s National Championship Semifinalist Arizona State University.

“There is no substitute for quality daily training environments to foster our future Eagles; however, we are finding through this process that players and talent do come in all forms and from all walks of life,” Stephenson said. “It has been a great experience to see those players who have come through the High School All-Americans and Regional Cup Tournaments excel, especially when we are able to use the June RCT window as a benchmark to track their progression.”

As more and more talented athletes graduate from the MJAA program to garner future honors with the AIG Men’s Collegiate All-Americans and senior Eagles, it is exceedingly important the training environment of each is replicable. While the Camps this month bear the MJAA moniker with a focus on identifying athletes for under-20 competitions in 2017, the results from the assemblies will be shared across the High Performance Pathway.

“The three Camps are completely standardized to allow for transparence across the board for the external coaches (MCAA, Eagles) to be able to analyze and compare,” Stephenson said. “We have been fortunate enough to have great input from the Eagles coaching staff in terms of content, session plans, and tactical periodization of the weekend. The terminology, look, and feel of these Camps are for our young players to emulate the Eagles and to facilitate an easier transition upward.”

Former Eagles Shawn Pittman, forwards coach of the MJAAs, and Rob Randell, Eagle No. 228, will work with the young athletes, as well. Metrics from the Camps will be shared with coaches across the country, many of whom assisted national team staff with athlete recommendations and offered their own services to the pathway.

“We were very fortunate to have engaged with local RCT and representative coaches during this process who were open and willing to adapt to difference processes, structures, and philosophies,” Stephenson said. “Having a geographic player representation at our East Camp of 23 different states, coupled with five different RCT head coaches also in attendance, has placed a greater emphasis on keeping our coaches as engaged in our program as the players.”

The under-20 program is building towards qualification for the 2017 World Rugby U20 Trophy, to be held in Uruguay at the end of August. Three Camps in the winter give the MJAA staff the opportunity to see more young athletes than in previous cycles, and a June date for the qualifying series with Canada should allow for a better percentage of athletes to be available for selection.

Developmental Camps will be held in January and February of the new year ahead of the U20 Trophy Qualifiers in British Columbia.