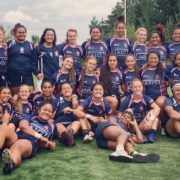 SEATTLE – The USA Rugby Girls High School All-Americans powered by ATAVUS finish their summer of 15s with two more wins at Magnuson Park against BC Rugby U18 Women’s, bringing the tally between the ‘west’ team and under-18 and under-16 ‘east’ teams to 6-0 in the span of two weeks.

Farrah Douglas’ ‘east’ teams claimed victories in all four matches played against Rugby Québec’s under-16 and under-18 sides at Mount St. Mary’s University in the previous assembly, conceding only 18 points across more than 200 minutes of play. The smaller ‘west’ assembly called for a squad of 28, including nine young women that defeated BC Rugby’s under-18s last summer in a two-match tour north of the border, that swept this year’s series with a combined 99-29 score line.

“The team worked hard throughout the week developing continuity in the attack structures and looked to develop our defensive dominance,” the head coach said. “The level of physicality on both sides of the ball was fierce Friday, and the BC attack forced us to hold some impressive goal-line stands.

“The GHSAA team faced a new challenge by a stronger, smarter, and fitter BC team. BC did their homework and came to Seattle prepared to defend our style of play. They forced errors by squeezing around the tackle to suffocate our attempts at continuity. This summer we saw them play a much more tempo-paced attack.”

The GHSAAs scored through Mata Hingano within minutes of the opening whistle in the first match of the tour, but two BC tries put the GHSAAs behind at 12-7 before the 10th minute. Set-piece dominance won out for the GHSAAs, and Nia Toliver benefitted from the space to regain the lead. The teams traded tries before the GHSAAs ended that streak ahead of the half-time whistle to hold onto a 28-17 lead at the break.

Two quick tries to open the second half gave the GHSAAs the breathing space they needed at 40-17 before BC found the try zone for the last time during the first matchup. Toliver finished off the match with two tries to go with her first-half score for a hat trick.

“The GHSAAs did well setting up our attack structure, moving the ball into space and utilizing width,” Douglas said. “However, we did make a number of errors in an effort to play with tempo and continuity.

“On attack they were able to make the necessary adjustments that allowed us to be effective in our systems, although they did the same on defense. We were somewhat less successful as our work-rate around the tackle contest was inconsistent at times.”

The thorough review of Friday’s game could be seen in the GHSAAs’ play in Sunday’s encounter, with the teams using an extended bench to employ all of the players that traveled to Washington. Tamaivena again scored an early first-half try for the All-Americans, and a knock against BC at the end of a potent attack kept the score at 5-0.

Toliver’s try-scoring exploits have traveled around the world, and she kept her GHSAA account rolling with a 12-0 try midway through the frame. Captain Sui A’au joined the party to extend the lead to 19-0 before BC capitalized on a five-meter penalty by the GHSAAs to bring the score to 19-5 at halftime.

Toliver’s second five-pointer set the tone for the second half, with the GHSAAs keeping their composure through a strong BC tackle to exploit the space out wide. A’au added her own second try – and third of the weekend – as the GHSAAs kept BC scoreless in the second half for a 55-5 final.

“As we look forward to upcoming competition we will continue to work on building more defensive line speed, develop more discipline at the offside line, and develop a more territory-oriented game, allowing us to capitalize on the kicking of McKenna Strong, Mele Tausinga, and MaryJane Pasioles,” Douglas said. “The key to our defense is to continue to physically dominate in our tackles.”

A GHSAA squad of 12 will travel to France this fall for Women European Championship 7s U18s Sept. 10-11. The roster is available here, with more tournament information to be announced later.