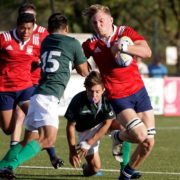 CRÉAC’H GWEN, France – Portugal scored three second-half tries at the Rugby Europe Men’s Under 18 European Championships to peel away from the USA Rugby Boys High School All-Americans in a 26-5 defeat.

The BHSAAs scored the match’s only try through 45 minutes in the 70-minute game, which sees Salty Thompson’s squad drop out of contention for the ultimate trophy in France. The All-Americans will return to action Tuesday, April 11, against Spain.

“Twenty hours of travel and one day of practice wasn’t the best scenario for success,” Thompson said. “We showed structure and commitment in defense. Our intention was to play the game in Portugal’s end with our nines and 10s managing our attack. We tried to play too many phases in our half and turned the ball over, granting Portugal three penalties to our single try in the first half.

“We were direct in our running and had width, but failed to hold onto the ball with potential try-scoring line breaks. Credit to Portugal, who dominated the lineout and fed off HSAA mistakes.”

Thompson’s All-Americans fell behind early after mishandling the opening possession from the restart. Portuguese outside center José Costa knocked over a three-point penalty kick from a slight angle inside two minutes. The deficit was compounded by an injury to starting lock Blake Richards-Smith, who limped off of the field in the fifth minute.

Full back Eric Naposki-Abdalah was a dangerous attacker throughout the match, countering well with a combination of awareness and pace in the seventh minute to put the BHSAAs on the front foot. That particular attack was called back to a knock against the All-Americans, who received possession moments later as Portugal was cited in the set piece. From the ensuing lineout five meters from the try line, prop David Ainuu drove forward across the line in what appeared to be the opening try. Without a clear grounding amidst a pile of bodies, the match official signaled the try had been held up by the defense.

The BHSAAs were slowly pushed out of the Portugal 22 until another Naposki-Abdalah run was undone by a knock. Portugal’s clearance kick drew another penalty out of the All-Americans, which allowed Costa to send another penalty kick through the uprights for a 6-0 score line.

Fly half Justin Petersen broke the gain line in the 19th minute with a darting run across the 10 and inside center Quinn Perry neatly grabbed his teammate’s offload, but the attack came to nothing with a pass finding touch. Petersen was unable to turn pressure into points minutes later, as he missed a penalty attempt wide. The BHSAAs did well to recognize Portugal’s rights to continue playing with the ball not kicked out of play, and stemmed what could have been a devastating counter attack.

Naposki-Abdalah was taken into touch at Portugal’s 22-meter line with a 26th-minute kick return, and the BHSAAs stole the ball in the air to set up captain and No. 8 Bailey Wilson on a fend-happy run to the try line. He was stopped short and won a penalty, from which the All-Americans opted for a put-in. The ball quickly came out to wing Mateo Gadsden for a 6-5 score.

A chip-and-chase by Portugal was cleaned up by the All-Americans as the half drew to a close, but another penalty inside midfield set up Costa’s third penalty kick and a 9-5 deficit heading into the break.

Hooker Gabriel Mahuinga tore through the defense inside the Portugal 22 in the 43rd minute, but a turnover and kick downfield by Portugal preceded a knock against the All-Americans in their own half. Portugal lost the ball forward before a sure-try-scoring run, and won the ball back from the set piece for Francisco Afra to jump over the line in the corner.

The All-Americans could not claw their way back into the match as Perry missed a penalty kick from a penalty drawn by Asa Carter moments later, and Costa toed a loose ball behind the U.S. defense for Afra to score his second and bring the 53rd-minute score to 21-5.

Spain will join the BHSAAs in the bottom Semifinals, with the match scheduled for Tuesday, April 11. The match will be streamed live via Rugby Europe TV from 10 a.m. ET.