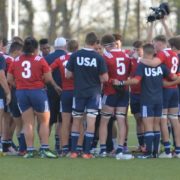 CREAC’H GWEN, France – The Boys High School All-Americans closed out the Rugby Europe Men’s Under 18 European Championships with a 13-12 loss to Canada in the tournament’s Seventh Place Final Saturday.

The North American teams were winless through four combined games in France between Friday, April 7, and Tuesday, April 11. Wing Ryan James and hooker Gabriel Mahuinga scored the tries for Salty Thompson’s All-Americans, who left points on the board with several missed kicking opportunities. The young athletes returned home on the weekend having gained memorable match time against some of Europe’s top talent.

“The development experience is priceless,” the head coach said. “The benefits of competing at this level at this age allows players to sample what’s needed to be successful moving on. It’s an eye opener for most and they realize the level of core skills, decision-making, and teamwork needed for success.”

A very late winner for Spain in Tuesday’s Semifinal pairing sent the BHSAAs to Saturday’s Seventh Place Final, whereas Canada was shut out by Belgium in the lead-up to the border rivalry clash. Canada ended up matching its scoring output from a 43-3 defeat to eventual runner-up Georgia in the ninth minute when the U.S. conceded a penalty well within its half, with wing William McDougall-Percillier slotting his first of two penalties.

The BHSAAs’ kicking woes started early, as an 11th-minute chance for full back Erik Naposki-Abdalah to level the scores went begging. A high tackle called against Canada during the All-Americans’ next possession preceded a well-placed grubber by fly half Quinn Perry to be chased, though Canada momentarily cleared the danger with a lineout.

The U.S. set piece was also not functioning at optimal capacity, but the team continued to attack with pace. Prop David Ainuu ensured the BHSAAs won turnover ball in the 19th minute with a devastating ruck cleanout and James broke the gain line for a fast break. The lock pairing of Asa Carter and Garrett Kay followed to take the BHSAAs within five meters of the try line, where they were held up by Canada for a turnover.

Flanker Matt Meehan took a 10-minute rest from the 22nd minute for a yellow-card offense, but the BHSAAs benefitted from the Canadian kick not finding touch for the match’s first try. Captain Bailey Wilson provided the final pass to James in contact for the wing to dummy a defender ahead of the attacking 22 and race past two more for a 5-3 score.

Canada No. 8 Reid Davis also saw yellow with about five minutes remaining in the half as the BHSAAs held onto their lead at the end of the first 35-minute period. The on-field player-advantage worked more in Canada’s favor in the second half, however, with McDougall-Percillier following teammate Jack Scher’s missed penalty goal with a try from the 22-meter drop. Scher converted for a 10-5 Canadian lead.

The BHSAAs won a needed turnover outside their try line after Canada scrum half Joshua Engelbrecht dummied his way from the 22 for a prop to cross the 10, but two penalties in quick succession led to more Canadian points. Scher missed one from an angle before McDougall-Percillier extended his side’s lead to 13-5.

The All-Americans found some ascendency in open play in the ensuing minutes, with Wilson crossing the try line only to be held up in-goal before a series of crashes at the line resulted in an offensive penalty rather than a try. A knock outside the line in the 59th minute ended another attack, but the BHSAAs did well to defend their own end to keep Canada from scoring.

Though the BHSAAs struggled in the lineouts throughout the tournament, those turned over in the Seventh Place Final were especially disconcerting for Thompson. The team was lucky to win a penalty after a 63rd-minute set piece was lost, but a well-worked attack from the quick tap again earned no points as substitute Kyle van Tonder’s kick from in front of the posts went wide.

Mahuinga took the ball over in the 67th minute on a counter after the BHSAAs capitalized on a poor Canada lineout at the 22, but the converted score was not enough to overturn the deficit for a 13-12 final score. While Canada also sent kicks from the tee wide of the uprights in the encounter, the BHSAAs, for the second match in a row, lost a game by fewer than five points.

“Missed kicks at goal through conversions and penalties cost us against Spain and Canada,” Thompson said. “We used four different kickers who performed in training but failed under pressure in games.”