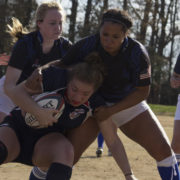 LAFAYETTE, Colo. – The 2016 USA Rugby Women’s Division I Fall Championship will be contested by the same teams that battled over 80 minutes for the title last year: reigning Fall Champion University of Connecticut and runner-up Air Force Academy.

Connecticut was forced to defend its title early in the play-in round prior to the Nov. 19-20 East Regional weekend in Poughkeepsie, N.Y., and faced the stiffest opposition of the weekend’s Quarterfinals in the University of Notre Dame. Each time the Huskies scored a first-half try, the Fighting Irish responded in kind, though the third reply came after the break. Level at 19-19 with 15 minutes to play, Connecticut grabbed a 26-19 lead and kept Notre Dame from the try zone to advance to Sunday’s Semifinals.

Boston College’s No. 8, Jade-Alexandra McGrath, and outside center, Monica Thorne, combined for seven tries – a hat trick apiece – in leading the team to a Semifinal berth at the expense of an unfamiliar opponent in University of Northern Iowa, 79-26. Connecticut, however, was a familiar opponent, and one the Eagles had matched in conference play with a 1-1 record.

The Eagles replicated Notre Dame’s efforts against the Huskies, leveling the score at 7-7 before halftime after conceding just minutes into the contest. Much like their last meeting, the Semifinal went down to the wire, with Connecticut pulling out the 14-7 victory with a try 10 minutes from time.

Cincinnati’s Brimelow Fields was the site of the West Regional, where Air Force was made to work for its Semifinal place against a young Texas A&M University squad in Saturday’s Quarterfinals. The Aggies kept it close in the first half, trailing, 25-14, at the break, but could not counter the explosive cadet offense in the second half as Air Force padded the score line to 66-14.

Rutgers’ first trip to the DI playoffs came out of a competitive Big 10 Conference, where Notre Dame took the first seed to match up with Connecticut. The Scarlet Knights traveled from New Jersey to Ohio and gave University of Minnesota – a Semifinalist in 2015 – all it could handle in the Quarterfinals.

Taking an early lead, the Gophers could not keep a dynamic Rutgers XV from crossing the try line, watching a 17-5 lead dwindle to 17-12 at halftime. Both teams’ depth was tested with several injury substitutes, with Rutgers falling behind as far as 36-17 before the final whistle, 43-27.

A rematch of the 2015 Semifinal, Air Force and Minnesota battled for a place in the Dec. 4 Fall Championship Final. Minnesota scored the first try in the game to take a 5-3 lead 16 minutes in, but conceded within 10 minutes and never regained the advantage. Close, at 22-15 early in the second frame, the Gophers allowed four unanswered tries down the final stretch for a 44-15 final score.

Connecticut defeated Air Force at Furman University to claim the DI Fall Championship trophy, and will have to do so again to defend its title. The Final in Greenville, S.C., will be aired live on The Rugby Channel from 11 a.m. ET Sunday, Dec. 4.