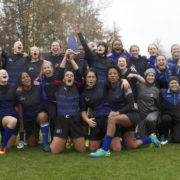 Head Coach Amy Rusert’s cadets survived a long Regional Playoff weekend last month to make their second run at a Fall Championship in as many seasons, and scored 19 unanswered points in shutting out the reigning Fall Champion for 70 minutes. No. 7 Rhea McFarland was named Most Valuable Player of the Final, just one member of a tenacious forward pack that silenced the Huskies in treacherously wet playing conditions.

It was Connecticut that opened the scoring, much like it did in 2015. The Huskies had an attacking platform at the Air Force 22 in the first 10 minutes and capitalized, with full back Sara Rothery using a burst of acceleration to reach the five-meter line before giving wing Alicia Alleyne the offload.

Scored wide, the Huskies’ try was not converted, but Rothery added three points with a penalty goal midway through the first period for an 8-0 lead. As the saying goes, the team that concedes is more susceptible to succumbing again. For Air Force, however, the eight-point deficit was enough. Using possession from the ensuing restart, the cadets built an attack until Connecticut was called for a knock barely 10 meters from its try line. Air Force No. 8 Lauren Fortney took the ball from the set piece and dashed for the line, where flanker Ashlee Salato grabbed it from the ruck and took it over the line for an 8-7 score.

Connecticut’s lead survived through halftime, but Air Force’s momentum carried through to the second frame. Prop Maria Carter gave her side a 12-8 lead three minutes after the break, and the cadets began to constrict a strong Huskies attack. Scrum half Kelsie O’Brien did well to save possession in Air Force’s scrum behind the Connecticut 22 in the 57th minute, and Air Force sent the ball wide for lock Simone Duryea to take over the line. Full back Jacqueline Hamby converted the match’s final try, and Air Force kept its penalty count low to see out the 19-8 victory.