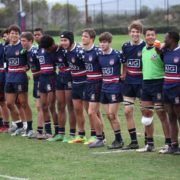 There will be no charged admission for the first match in Edmonton, but fans planning to attend the qualifier finale must purchase tickets for Canada’s senior national team’s international test against Romania. Those tickets can be purchased here, with Rugby Canada’s planned live stream information for both matches to be announced at a later date.

“The coaching staff is very excited to work with the players that have been selected for the squad,” Stephenson said. “There is a good mix of players from various backgrounds that we feel can be competitive and, more importantly, proudly represent the All-American crest and USA Rugby.”

Five players, including Eagle Lorenzo Thomas, from last year’s MJAA team that finished fifth at the U20 Trophy in Zimbabwe remain eligible for under-20 selection and have been named to the summer’s aggregate qualifier series assembly. Malon Al-Jiboori, selected to represent the U.S. on the HSBC World Rugby Sevens Series this year, and Deion Mikesell are also back with the team having helped the MJAAs qualify for the U20 Trophy in 2016.

U20 Trophy veteran Ruben de Haas is one of seven selections to have suited up for the one-time MJAA developmental team earlier this year. Quinn Perry and Bailey Wilson were also members of the under-19 squad that split results against its Canadian counterpart, while both went on to lead the Boys High School All-Americans in this spring’s Rugby Europe Men’s Under 18 European Championships. Wilson captained the under-18s in France.

Of the 19 student-athletes competing at the collegiate level, 15 of those selected play for D1A Rugby schools, among them University of Colorado, Boulder, Pennsylvania State University, San Diego State University, and St. Bonaventure University. Christian Dyer and Jack Iscaro represented their country internationally with the BHSAAs prior to attending Berkeley, as well, while Central Washington’s Deven Marshall and Brian Nault are also no strangers to age-grade national teams.

Stephenson and his staff, including former All-American Colton Cariaga and Strength and Conditioning Coach Justin Goonan, and each of the age-grade programs have worked hand-in-hand with Eagles Head Coach John Mitchell and Co. to ensure player development in the High Performance pathway jibes with the goals of the senior side. From the sharing of player data at the winter’s assessment camps to discussions around game plans stemming from the U.S.’s Americas Rugby Championship triumph, the MJAAs will more closely resemble the Eagles than in competitions past.

“We have been fortunate to integrate with our men’s National Team in terms of structure, terminology, and process, which will look to allow for continuity for those players who are fortunate enough to progress into the Eagles,” Stephenson said. “However, within this framework, we hope to have a distinct style of play that allows for our players to have a different and unique experience with the honor of representing their country.”

The extended assembly in Edmonton has been made possible by donations from Adopt a Young Eagle initiative, giving players and staff invaluable time together to prepare for their first competition of the year. The winner of the two-match qualifier series – based on a combined score line – will represent the Americas in the World Rugby U20 Trophy in Montevideo, Uruguay, Aug. 29 to Sept. 10.

“The generosity that has been shown by key individuals allowing for the funding of our camp and matches in Edmonton has been extremely humbling and I can’t thank these unsung heroes enough,” Stephenson said.

Streams for both matches have been confirmed by Rugby Canada, with the final details for viewers to be announced at a later date. Tickets for the June 17 match can be purchased via Rugby Canada’s events website.