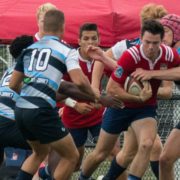 VANCOUVER, British Columbia – The Boys High School All-Americans are back in Canada this week preparing for a two-match slate against BC Rugby’s under-18 team at University of British Columbia.

Head Coach Salty Thompson has assembled a squad of 25 young athletes, nearly half of whom have represented the BHSAAs in international competition in the past year. Gonzaga’s Ian Kilcullen returns to the 2017 western squad after helping the eastern squad defeat an under-19 team from Ontario Blues June 29 and July 1.

AIG Men’s Junior All-Americans forwards coach Chris Oosthuizen joins Thompson and assistant coach Brendan Keane on the staff, with Jane Kluempers returning as team trainer. Staying in the dormitories and training at University of British Columbia, the BHSAAs will face the BC Rugby team Thursday, July 13, and Saturday, July 15, in a repeat of a 2016 tour north of the border.

Prop David Ainuu out of Washington was a member of the 2016 team that swept its opposition by a combined score line of 102-3. That tour also followed an Ontario Tour that resulted in BHSAA victories, with the 2017 incarnation 160 minutes from replicating the feat.

There are no announced plans for the matches to be broadcast.