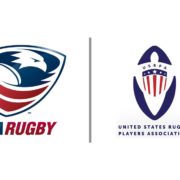 LAFAYETTE, Colo. – USA Rugby (USAR) and the newly-formed United States Rugby Players Association (USRPA) have announced today a partnership committed to aligning their shared interests and respective strengths. The formation of the USRPA, which is independently governed by the Players and has in its membership all rugby athletes who represent US Senior National Teams, is a positive development for the game in the United States as it continues to grow at all levels.

The USRPA seeks to promote, advance and protect the welfare of USA Rugby Players by ensuring Players take responsibility for contributing to the game’s development, are collectively organized and that their voice is heard and respected.

USA Men’s Eagles Co-Captain Blaine Scully sees this development as a major step forward for both Players and USAR: “It is important for the success of the game in the United States that the elite players have a collective voice. The relationship between USAR and the USRPA is fundamentally founded on a strong sense of partnership and shared purpose. Both parties are committed to dialogue and collaboration which will allow the players to have input in key issues, but also take ownership in the development of the game.”

USA Women’s Eagles Sevens Olympic Captain Kelly Griffin is looking forward to the partnership between USAR and USRPA enhancing communication on issues of importance to Players: “As players, we highly value the opportunity to provide input into issues that affect our playing environment and welfare. USRPA will provide us with a collective means to do this. It is so important that all four national teams work together to progress our sport.”

“What a great way to start off what will prove to be a historic week for rugby in our country. First and foremost, I want to state how proud I am of the players that have invested a lot of time and energy into this agreement,” said USA Rugby CEO Dan Payne. “The development of USRPA is a positive event for rugby in our country. In addition to ensuring there are open and clear lines of established communication between the union and the players, this agreement will further define a large number of processes and expectations as we move forward. USA Rugby fully supports our players’ intent and motive for forming this association.”

“I want to thank all that were involved in this process. One that has been collaborative, respectful and always put the progress of our game at the forefront. The word partnership has been prominent and frequent in all discussions”

The USRPA has the support of the International Rugby Players Association (IRPA) and will attend the upcoming IRPA conference in Dublin with other domestic player associations throughout the world to share best practice initiatives as the USRPA evolves. IRPA President Richie McCaw welcomes the formation of USRPA saying, “this is an extremely exciting time in the United States, with the opportunities arising it’s really encouraging to see USA Rugby and the players working together for the betterment of the game.”

The USRPA and USA Rugby are in the process of finalizing a memorandum of understanding that provides for ongoing collaboration and negotiation with the aim of protecting player welfare and ensuring the athletes are viewed as valued stakeholders in the game. In memorializing this historic partnership, the USRPA recognizes the courage and sacrifice of previous players and is guided by the principle that its members must “leave the jersey in a better place.”

Established in 1975, USA Rugby is the governing body for the sport of rugby in America and a Full Sport Member of the United States Olympic Committee. Currently headquartered in Lafayette, Colorado, USA Rugby is charged with developing the game on all levels and has more than 125,000 active members, with more than 32,000 playing collegiate rugby and 27,000 playing senior club rugby. USA Rugby oversees four national teams, multiple collegiate and high school All-American sides, and an emerging Olympic development pathway for elite athletes. It also hosts more than 30 national playoff and championship events each year as a service to its members. In October 2009, the International Olympic Committee announced Rugby Sevens (the seven-a-side version of the game) will appear in the 2016 Olympic Games to be held in Rio de Janeiro. Visit www.usa.rugby for more information.