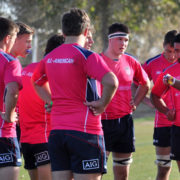 LAFAYETTE, Colo. – One of the largest national team assemblies of the year begins at Grande Sports World in Casa Grande, Ariz., Dec. 27, as 160 young athletes look to feature in future All-American and Eagles tours from the Boys High School All-Americans Winter Camp.

Head Coach Salty Thompson and a network of scouts from youth clubs and high schools around the country have identified talent from the 2016 Regional Cup Tournaments throughout the year in preparation for the end-of-year camp.

Fifteen senior and junior BHSAA-eligible student-athletes (born in 1998 and 1999, respectively) will be at the Olympic Training Center during the Winter Camp, having graduated to the AIG Men’s Junior All-Americans Developmental Team for a two-match series with Rugby Canada’s under-19s.

While there are several BHSAA alumni from this summer’s Ontario and British Columbia Tours scheduled to be in attendance over the New Year’s holiday, the majority of those headed to Arizona will be experiencing their first High Performance training environment with national team staff. Forty-one, or 26-percent, of the Camp are returners. Encompassing the 1999 (under-18), 2000 (under-17), 2001 (under-16), and 2002 (under-15) birth years, the Winter Camp will also be split into “Varsity” and “Junior Varsity” training groups.

“The RCTs were much more competitive this year,” Thompson said. “We had some referrals for current ninth graders playing in the middle school brackets, as well, and have taken some kids that we think will project well in the future. The point of bringing in young boys is getting them exposed to this type of environment so they’re more prepared when they come back.

“The players are sort of stamping their names onto depth charts, which would mean by next summer’s RCTs – if a player comes out of Winter Camp looking good and then plays well in an RCT as we’d expect – their chances of being selected to the BHSAAs in the summer are good. For the younger boys we’re looking for the same; there’s no reason why a sophomore can’t project himself into competition for the BHSAAs.”

Despite the age split in Camp, all athletes will participate in training sessions molded by the senior Eagles, MJAAs, and AIG Men’s Collegiate All-Americans programs. The curriculum includes fitness testing, core skills work, positional skills coaching for forwards and backs, and introductions to patterns of play in attack and defense with a greater overall focus on teamwork. In addition to having shadowed several of Eagles Head Coach John Mitchell’s training sessions in 2016, Thompson has a qualified, 30-strong coaching staff able to properly put the young rugby players through their paces. Each group will work with a dedicated portion of staff to maintain continuity in the developmental setting.

Adding to the professional environment at Camp is the host itself, Grande Sports World. Used primarily by Major League Soccer and international soccer teams, the facility features eight full-sized fields, state-of-the-art strength and conditioning equipment indoors and outdoors, and recovery facilities located within a three-minute walk from hotel-style accommodations. There are also coaches offices and six classrooms adjacent to professional-quality locker rooms, allowing for unparalleled immersion in Camp.

Though there will be additional opportunities to catch the eyes of BHSAAs selectors prior to touring, the Winter Camp will provide athletes with an eye-opening four days of intense training with a large group of similarly-inclined athletes.

“We want them to build confidence and learn how they compare to their peers in Camp,” Thompson said. “You can be good in your own backyard, but when you come in here you realize, ‘This kid comes from a completely different part of the country, he can do this; how do I match up?’ We’re exposing them to a level of competition they maybe didn’t know existed.

“Hopefully they go home and, with a bit of confidence, focus, and ambition, say, ‘I want to be a High School All-American.'”