The Orlando Griffins  men’s club also traveled northeast to take on the Jacksonville RFC.  The results literally came down to a successful conversion from the Griffins.

Jacksonville held onto a 36 to 26 lead with eight minutes in the game before Orlando scored two tries to even up the game at 36 to 36.  However, the Griffins’ successful conversion on their second try gave Orlando the win over Jacksonville.

Both clubs benefitted from penalty tries (one a piece).  As for the rest of the scoring, Orlando earned five tries and three conversions, while Jacksonville only successfully converted two of its five tries.

Both the Boca Raton Buccaneers v. Miami Tridents and the Fort Lauderdale v. Okapi Wanderers games were postponed due to field and weather conditions. 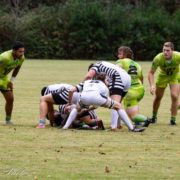