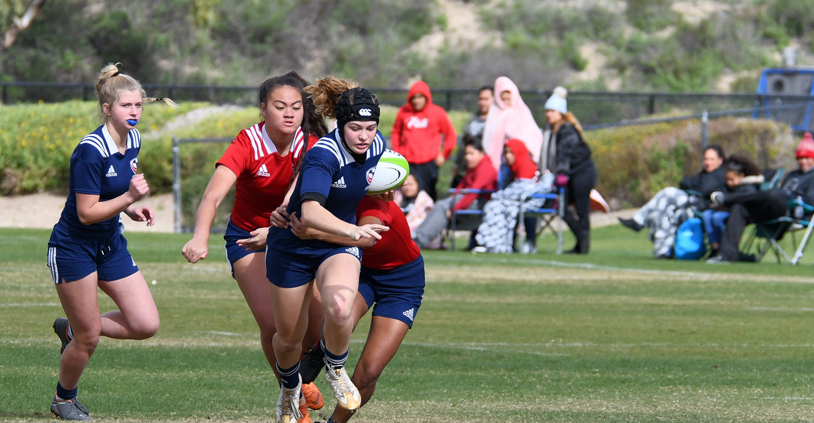 CHULA VISTA, CA. – Last month, more than 150 girls and boys U18 High School and U19 Rising Junior All-Americans attended one of the largest winter camps ever hosted by USA Rugby.

Held at the U.S. Olympic Training Site in Chula Vista, CA from Dec. 26-31, four groups of athletes assembled for a period of training and trial games where they tested their strengths against some of the best emerging rugby players in the country.

The U18 Boys High School All-Americans faced Canada U18s in a four-game series which saw the United States go unbeaten with three wins and one draw. U19 Rising Men’s Junior All-Americans faced a development team from Belmont Shore and achieved a smashing 69-17 victory.

On the Women’s side, trial matches saw U18 and U19 players split into groups to play each other in a string of intrasquad matches in both fifteens and sevens (U18 only).

Overall, Winter Camp 2018 proved to be a memorable experience for all involved, allowing players to build friendships that stretched the bonds of rugby far beyond their hometown circles.

This is the camp experience, as told by four representatives of USA Rugby’s All-American programs.

How were you selected to Winter Camp?

Paula Vincze | U18 Girls | Summit High School, CO
“I was selected from a USA Rugby Academy camp late last year with Emilie Bydwell and I was actually invited to the sevens tournament [CanAm Futures Sevens] this summer in Saranac New York. From there I was invited back to Winter Camp but I also played in the RCT this summer with Jamie Burke for the Rugby Colorado High School Girls.”

Bailey Wilson | Captain, U19 Men’s | Utah Valley University, UT
“I was selected for winter camp based because I was in the U20s setup the last two years. I received an email from Coach Bracken to see if I was available for winter camp and I was beyond excited to go.”

Max Schumacher | U18 Boys | Jesuit High School, CA
“My overall experience at camp was amazing. The facilities were more than I had ever expected. The mood of the camp was rightly professional in all aspects, from effective field sessions to diligent team meetings. The organization of the camp was flawless thanks to our Team Manager Kevin McCorry and staff. As players we always had what we needed. But it was more than just a professional experience because it gathered a good group of guys from all over the country and we had a blast while in Chula Vista.”

Paula Vincze | U18 Girls | Summit High School, CO
“I think my overall experience was one of my favorites so far. I really liked the facilities because I haven’t been to Chula Vista and it was really, really cool to be there. I liked the intensity in practices when we were given certain drills and a hard-working schedule because I usually don’t get that on a regular basis.”

Erica Jarrell | U19 Women’s | Harvard University, MA
“I have a whole bunch. The first one that stands out to me is in the first couple practices I was still nervous, it was my first camp and I’m pretty sure I was the oldest person there — if not one of the oldest — and so everyone knew each other. I was really nervous and then in the first few practices we played this version of rock, paper, scissors where, when you win the person you beat starts cheering for you. So then eventually, you get this big crowd of people all cheering together over a rock, paper, scissors game and just something about that moment — where we were all screaming for each other over this completely insignificant thing — really felt like a team moment.”

Max Schumacher | U18 Boys | Jesuit High School, CA
“My favorite memory was definitely the jersey presentation ceremony. It illustrated the character and tradition involved in rugby in the US. It was a special moment to share with my coaches and teammates as we readied ourselves for Canada the next day.”

How did intrasquad play or trial matches challenge you as a player?

Erica Jarrell | U19 Women’s | Harvard University, MA
“There’s something to be said about learning to play with an entirely new team over just five days. I think I found myself being pulled out of the roles I usually fall into with my team at Harvard, we know each other so well that things can become a bit prescribed. You’re not always carrying, sometimes you’re passing, sometimes you’re calling for a kick — these are decisions that I’ve never had to make before and it just gave me a different perspective on the field. Even our practice scrimmages were at a level of play that I only reached in the final of a championship before.”

Max Schumacher | U18 Boys | Jesuit High School, CA
“The matches against Canada challenged me as a player through the fast pace of play. It is a much higher quality and speed at the international level and requires much more focus and attention to detail to minimize mistakes and maximize opportunities.”

Describe what it was like working with All-American coaches and staff?

Paula Vincze | U18 Girls | Summit High School, CO
“I’ve played for some of these coaches before and so they’re my absolute favorite. And along with all the nutritionists and the trainers, they created this really perfect environment that helped me grow as a player.”

Bailey Wilson | Captain, U19 Men’s | Utah Valley University, UT
“The All-American coaches are incredible. They care about us so much on and off the field. They don’t want us to only be great rugby players but great men too. The staff literally held us together. Whether it was taping before sessions or making sure that everything was running smoothly, we couldn’t have done it without them.”

Do you have any advice for young players who want to become All-Americans?

Erica Jarrell | U19 Women’s | Harvard University, MA
“Just play as much rugby as you can and talk to your coaches about development plans. Honestly, more than anything just buy in. I only started playing rugby in fall of 2017 but over the last year rugby has been my life — I eat sleep and breathe rugby — and that just makes it so much easier to do all the work it requires, when you absolutely love it. It sounds cliche, but it’s not work.”

Bailey Wilson | Captain, U19 Men’s | Utah Valley University, UT
“Advice I would give for someone who wants to participate in future winter camps is to keep working hard and be a great rugby player, but also a great person. The coaches are not just looking for the on-field performance but how you act the rest of the time.”

U19 Rising Junior All-Americans can be selected for Winter Camp through previous USA Rugby All-American assemblies, club or collegiate programs across the country.