COLORADO SPRINGS, CO. – This weekend on the networks of NBC, America watched as 90 athletes trained in Colorado Springs, Colorado, with the goal of getting one giant step closer to pursuing their Olympic dreams through Season 2 of “Milk Life presents, Scouting Camp: The Next Olympic Hopeful.”

The talent-identification program is aimed at finding athletes with a background in any sport whose skills could transfer to various Olympic sports. The sports for Season 2 are bobsled, boxing, canoe/kayak, cycling, rowing, rugby, skeleton and weightlifting. One winner was selected for each sport, and the winners will attend camps with their sport in hopes of making the national team.

This year’s winners are comprised of five women and three men between the ages of 19-27 from all across the country. Their backgrounds range from high school sports to junior college to college athletics. Many of them didn’t know much about their sports before the camp, while others have been training for this specific moment for nearly their entire lives.

Each of the winners receives financial, medical and training support as they strive to make the national teams. During the five-day combine at the U.S. Olympic Training Center, the athletes competed in a number of tests selected by the sports that they felt most directly applied to competition.

Season 1 saw a fair amount of success, headlined by Josh Williamson, the winner for men’s bobsled. In the last year, Williamson has already won five international medals for Team USA. He has his sites set on the Olympics Winter Games Beijing 2022.

Past Sport Experience: Growing up I played a lot of different sports. At some point or another, I played basketball, swam, ran track, did martial arts but played soccer all throughout. As I got older, that was the one I ended up committing to. So, I played all through high school and went to play at the University of Arkansas and played four seasons there. My last season was the 2016 season, so about two years ago.

On being named the Net Olympic Hopeful: It means everything. It’s a huge pat on the back and validation for every single one of us who has worked so hard to get where we are and to see that recognized by the [National Governing Bodies] who have obviously seen a lot and know what they’re talking about and think that we have what it takes to be successful in their sport. It’s absolutely amazing.

On the sport for which she was chosen: I kind of suspected, but I was still surprised. I was hopeful but didn’t think it would actually happen, so when it did, I was still pretty shocked. 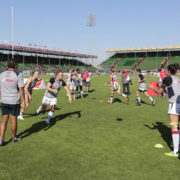