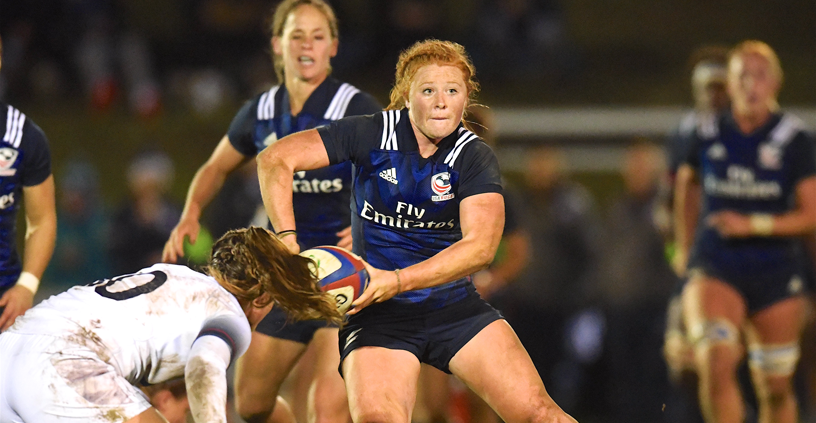 In their final battle of the Autumn Internationals 2018 — and after the Women’s Selects achieved a hard-fought 25-24 victory over England Academy earlier this week — the starting XV will feature seven changes from the Eagles’ last test match with the senior England Women.

“It’s been a really positive experience against New Zealand and England but I think the group really needed that win over England Academy, they fought really hard for it,” said Head Coach Rob Cain, reflecting on the touring squad’s overall experience this fall. “The amount of work that went into that has paid dividends for us to have a positive outlook for this week and we’re really excited about Ireland.”

USA’s forward pack will see Nick James and Katy Augustyn back at prop and hooker, respectively, while Kristine Sommer will earn the start at lock.

The backs will feature Carly Waters in at scrum half with Jennine Duncan earning a starting position at wing. Duncan joins the starting XV after coming off the bench to score the Eagles’ lone try last week against the senior England Red Roses. Waters and Duncan are accompanied by Kimber Rozier and Meya Bizer who join the starting XV at center.

After a collection of new Eagles made their debuts through the duration of the Autumn Internationals, the Women’s Eagles could see one more new cap awarded to reserve Tiana A’au this Sunday.

The contest will mark the first time the United States women have faced Ireland in more than four years with the most recent being a loss at Women’s Rugby World Cup 2014 in France. Having only met three times in the past two decades, the Americans own a 2-1 record against the Irish Women.

USA will kickoff their final contest of the Autumn Internationals 2018 against Ireland at 8 AM ET, LIVE on Irish Rugby YouTube Channel.