Elite Cup:
The Chicago Lions represented the Midwest in their Elite Cup match up with Old Blue of New York over the weekend. It was not Chicago’s day as they fell, 38-29. Despite conceding the first points of the match, Old Blue got back on track, piling 33 unanswered points on the Lions in 30 minutes. Heading into half time Old Blue was leading 33-3. Chicago out played Old Blue in the second half beating them 26-5, but it was too little too late and Old Blue were crowned the Elite Cup champions in 2018.

The Detroit Tradesmen continued their impressive run of victories, adding a third consecutive win to their streak and moving to 6-1 on the year. They achieved this after beating the Cincinnati Wolfhounds, 28-12. There were three lead changes in the first f15 minutes, before the Tradesmen eventually secured the victory. Ben Sa’u was the key influence in the game, crossing for two tries on the day.

The Kansas City Blues put in a dominating display against the Milwaukee Barbarians, beating them, 92-10. Four different players scored a brace each for the Blues, as they move to 3-3 on the season.

Palmer College Dragons and Metropolis were ensnared in one of the best games of the year, as Metropolis staged a late comeback to claim the, 18-17, victory. With 25 minutes left, the Dragons held a 17-8 lead, which evaporated when the men from Minnesota scored two tries in ten minutes.

The Chicago Griffins continued to roar, as they put away Columbus Rugby with ease, 47-10. Solomone Pauuvale scored two tries in their winning effort, with Joel Conzelmann going 6/7 on conversions.

There was a full slate of matches in the Midwest Women’s Division I competition this weekend, and there were some emphatic victories. The Minnesota Valkyries continued their perfect season, making light work of Chicago Rugby, 51-17. Abigail Smith scored a hat trick for the Valkyries.

The other game in the competition saw Detroit Rugby defeat Wisconsin Rugby, 32-12. Early it looked as though it could be Wisconsin’s day, as they shot out to a 5-0 lead early in the game. However, 22 unanswered points from Detroit put a dent in Wisconsin’s plan and saw an insurmountable gap between the two squads created.

In a match up to determine who would be the Midwest Division II regular season champions, Wisconsin Rugby came out and took the game by the horns, scoring an impressive 56-5 victory over the Indianapolis Impalas. The Impalas got a taste for how the rest of the game was going to go, with Wisconsin scoring a point a minute for the first 15 minutes. They’d go on to put up 35 total unanswered points before Indianapolis got on the board with 15 minutes to play.

The Chicago Lions D2 squad were able to finish off the regular season with a big win against Green Bay Rugby, 92-32.

The Chicago Blaze and Southside Irish were intertwined in a competitive fixture, as the Blaze were able to win, 33-29.

Two one-sided affairs in the Great Lakes as the Pittsburgh Forge dominated proceedings against the Syracuse Chargers; while, the Cleveland Crusaders crushed South Buffalo, 83-0.

In the Eastern Conference Semifinals, it was the Gold pool that came out on top both times. In the first game, the Pittsburgh Forge took apart Columbus rugby, scoring a convincing 36-5 win. Ashley Chipps scoring twice for the Forge.

Buffalo women then followed up their Gold counterparts by defeating a strong Cincinnati Kelts squad, 18-10. The two teams were locked at ten apiece as they went into half time, but a try shortly after play resumed and a penalty was enough to carry Buffalo over the line.

The Chicago Sirens claimed the Division II West Gold title over the weekend, after beating the previously undefeated Grand Rapids Rugby, 57-19. From the first whistle the result of the game was never in doubt, as the Sirens had leapt out to a 31-0 lead by half time. Grand Rapids launched a couple of comeback attempts, but they were silenced convincingly. Jessica Stabenow crossed for five tries in the match.

Iliana Banshees finished their season off with a commanding 48-19 win over the Fox Valley Vixens. Christina Kulka snagging 23 points in the effort.

Palmer College Dragons landed a big victory over the Will County Morrigans, 57-0 to close out their regular season, 53-0.

Milwaukee Scylla capped the regular season off with a big, 79-17, win against the Minneapolis Menagerie. Scylla finish the season at 5-2.

The Fox Valley Maoris beat the Illiana Misfits, 66-27, in the Chicago Area Championship to claim their 9th victory of the year.

Presque Isle Scallywags and the Cleveland Crusaders D3 side met in what was one of, if not, the toughest matches this season. On the line was the crown for the Midwest’s Division III East pool. It took 120 minutes of rugby to finally find a champion, who turned out to be the Scallywags. In a tremendous sign of resiliency, the only time the Scallywags held the lead was as they crossed for the eventual game winner in the 119th minute.

Iowa:
The Bremer County Bucks capped off a perfect season with a, 19-12, win against the Iowa City Ducks; as a result, claiming the Iowa title.

The Rochester Rogues closed out their year, with a 36-5 victory over the Makato Marauders. Sam Bastyr was the star for the Rogues capturing two tries on the day.

Detroit Tradesmen D3 were unable to replicate the efforts of their D1 squad falling to the Grand Rapids Gazelles, 36-7. Zebb Dewes-Taylor put the team on his back in a brilliant individual display, scoring 26 of the team’s 36 points.

Fort Wayne will finish at 6-2 after they defeated Detroit Rugby, soundly, 50-19.

The Kalamazoo Dogs proved there was bite to their bark, as they beat the Michiana Moose, 33-17.

The Toledo Celtics finished off their year with an impressive showing against the Capital Area Crises, winning, 44-7. The Celtics’ halves combined for the first 24 points of the match.

Queen City Rugby got the better of the Lexington Blackstones, 38-12. This was, in large part, due to the efforts of Patrick Meyer who scored four tries.

Louisville finished up undefeated as they took down the Dayton Flying Pigs, 22-15. This marked the first loss of the year for the Flying Pigs, and means that Louisville are the 2018 champions of the South pool.

The Columbus Castaways were assisted by Victor Banjo over the weekend, who scored five tries as the Castaways beat Columbus Rugby D3, 33-17.

Milwaukee Black and Blue were able to see off Oconomowoc Rugby 27-17; and The Wisconsin Sharks were too good for Fond du Luc Wolfpac, winning 39-10.

Women’s Division III:
The Dayton Flying Pigs beat the Louisville Riversharks 46-10. Amber Mullen scored over half the points for the Flying Pigs, tallying 26 in total.

The Metropolis D4 squad secured an impressive 48-29 victory over the St. Paul Jazz Pigs. Tries came quickly and often for them, with Randall Tanak
a and Kurt Siudzinski scoring three and four tries respectively. 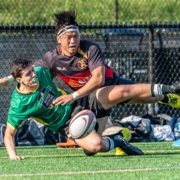 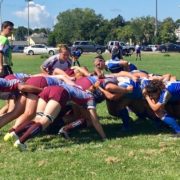