BUENOS AIRES, ARG. – Day Two of rugby at the Summer Youth Olympic Games Buenos Aires 2018 has ended with a mirror result of Day One for USA. With one loss and one draw, the United States moves to 0-2-2, currently sitting in fifth-place. Team USA will face home-team and first-place Argentina tomorrow at 10:05 PM ET to finish pool play before knockout rounds begin. All matches may be streamed LIVE on olympicchannel.com.

The Americans were off to a great start for day two of the Youth Olympic Games but came up just short. Johnny Mahe scored his first try of the tournament to open the game. With an open field out wide, South Africa came back to score a try with less than three minutes in the half. The U.S. seemed to have control during most of the first half but after, South Africa found a wide-open pocket and outran the Americans to score their second for the lead, 14-7. An interception at the restart almost led South Africa to another try but the U.S. was able to stop their opponent just before they reached the line. A strong, deep run by Isaia Kruse allowed him escape two tackles and dive into the tryzone for the Americans next, but Jon Rodriguez missed the conversion and was unable to tie the game. The USA defense was strong and held off the their opponent for a while; however, South Africa extended their lead with one last try to win the game, 19-12. As a whole, it was a very physical game from both teams with the United States’ progress clearly evident.

The Americans were still on the hunt for their first win of the Youth Olympic Games 2018 by the time they faced Japan. Johnny Mahe was able to score his second try of the tournament after a great series of passes and tackles helped push him over the line. A wide-open backfield was enough for the Japanese to come back and score their first try of the game, with a quick play soon after giving them another right away. Japan missed a conversion just before the end of the first half but still led 12-7. After the half, another wide-open field was just what the Japanese were looking for as they came in to score their third try. As a whole, the quickness of Japan was a struggle for the Americans to overcome; however, a fast Isaia Kruse found a way to outrun his opponent and dot down for USA to make it 12-17. A great pass by Inoke Waqavesi to Jasper Green, with only minutes left in the game, gave the Americans their last try of the match to tie it up. A missed conversion by Johnny Mahe was the heartbreaking end and saw the Americans barely miss their chance at victory with their second draw of the Games.

“Another challenging day in which we showed heart and real character to dig deep, but ultimately an inability to be clinical with pressure is the difference between winning and losing. There are some great learnings from today that will facilitate the growth and long-term development of our boys; they will only get better from these type of experiences”. 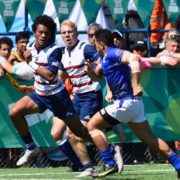 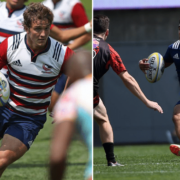 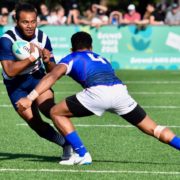